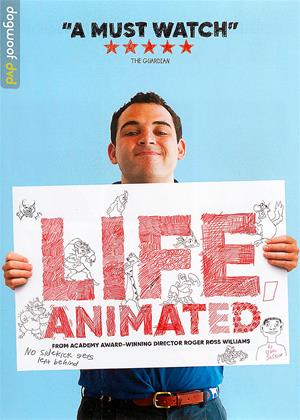 Synopsis:
"Life, Animated" tells the remarkable story of how a young boy, Owen Suskind, found in Disney animation a pathway to language and a framework for making sense of the world. By evocatively interweaving classic Disney sequences with verite scenes from Owen's life, the film explores how identification and empathy like lago, Sbastian and Timon forge a conduit for him to understand his feelings and interpret reality. Beautiful, original animations further give form to Owen's fruitful dialogue with the Disney oeuvre as he imagines himself heroically facing adversity in a tribe of sidekicks.
With an arsenal of narratives at his disposal, Owen rises to meet the challenges of adulthood in this moving coming-of-age tale.
Actors:
Jonathan Freeman, Gilbert Gottfried, Alan Rosenblatt, Owen Suskind, Ron Suskind
Directors:
Roger Ross Williams
Producers:
Julie Goldman, Roger Ross Williams
Writers:
Ron Suskind
Others:
Julie Goldman
Studio:
Dogwoof Digital
Genres:
Children & Family, Documentary
Awards:

Food for thought - Life, Animated review by BE

I am somewhat sceptical as to whether or not Owen Suskind (the autistic subject of the film) could only have been 'enabled to communicate' by the remembered dialogue from a host of characters from Disney films or whether at some point, something else could have triggered his power of communication. We shall never know as Owen is now in his twenties and still reliant on these Disney films - usually aimed at the limited intellect of children - to support his mental anguish and guide his way forward. It's all very sad as whilst he is now living semi-independently in an 'assisted living' environment, he remains of great concern to his aging parents and Walter, his older brother. Walter appears to feel a natural and overwhelming obligation to do the right thing by his younger brother for as long as he is able to. This must clearly impact on his Walter's lifestyle - he does indeed look burdened throughout most of the film. Whilst Owen graduated and is living as independently as he can away from the family home (and now working in a cinema), his autism causes him to be insular and tunnel visioned around his own wellbeing, with little or no empathy for anything or anybody else around him. Given his disability it is, of course, totally understandable to those who can empathise with his plight and his inability to verbally interact with other people to any degree. Unfortunately, not everybody he meets during the course of his ongoing life will have the wherewithal to understand or accommodate his mental needs. His persona, therefore, may not promote kindness and goodwill in others towards this very vulnerable individual.

A heartwarming, captivating and most of all - honest tale of facing life’s challenges while battling autism – Life, Animated is the true story of Owen Suskind and his trials and tribulations with the condition in mind. It is, at times sad and bittersweet, but it’s also motivating and funny, carrying along a message not many documentaries care to explore as deeply as director Roger Ross Williams does. A viewing that delves deeply into the condition of autism and helps others understand how consequences living with it reflect upon both an individual and the nearby community that is surrounding him.

Life, Animated follows the life of Owen Suskind, who at the age of three had started acting strange toward his parents. Little did they know Owen would never be able to normally communicate with them in the future, since he would soon be diagnosed with autism - to a great heartache of his beloved family.

There was still hope to be had however.

After seeking professional help, his father Ron (the author of a book this film is based upon) finally found a way to get in touch with his son. Namely, Owen became mesmerized by animated Disney features and was soon able to express many, if not all feelings through the often jumpy character gestures and exaggerated motions these fictional characters employed. While learning, Owen has used segments, moments - even whole scenes to convey what his thought were on a given topic. Features included were Aladdin, The Little Mermaid, The Jungle Book and many more.

What’s more: Life, Animated shows Owen memorizing all dialogue that Disney characters speak, whether it be long string of complicated jargon sentences, or one liners that deliver a punch-line made immortal by all who care to remember it. From here onward, Owen has managed to step over the obstacles and has started learning conventional and methodical knowledge techniques like reading, writing, and finally – speaking. His parents couldn’t be happier at this point, and we the audience feel it too.

Furthermore, the film’s structure combines animation, live footage from Owen’s childhood and later young adulthood, and various inserts from different animated Disney classics to show how Owen’s character develops through these steps. It’s both sad and nostalgic to see how he grows up to pursue a life of his own without the help of his parents; but it’s also cathartic to see Owen, after all that trouble, succeed in what he wants to do in life.

Ultimately, Life, Animated provides valuable insight into the lives of those with autism, and all affected sides for that matter. It’s a tale of endurance that will fill you with bittersweet joy once the credits start to roll.