Rent Tomorrowland: A World Beyond (2015) 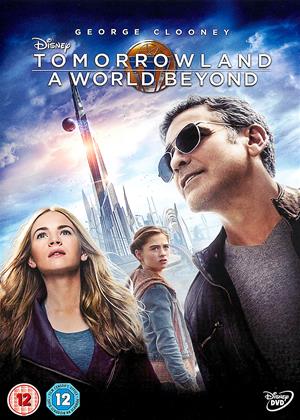 Reviews (4) of Tomorrowland: A World Beyond

Another Waterworld? - Tomorrowland: A World Beyond review by NC

Critics gone against this film, bit like Costner's Waterworld, which has now just broken even! Agree the story-line is a bit of a zig zag, but is still quite a good film to watch. Bit like AI etc...not as good as that......but still holds attention and is a bit different. Kids can watch it as well as adults...........

Aimed mostly at younger auduance - Tomorrowland: A World Beyond review by gazmb

I found this an Ok film it kept me watching until the end but really only just , I think the younger or early teens will enoy it the most as it does seem to be mostly aimed at them. I think it will be hit and miss with them as well.

Complex to the point of being boring - Tomorrowland: A World Beyond review by AB

Far too complex to be watchable - your soon get very confused as to what is going on and is there a why? or a how? or a when? A teenage film only so perhaps they can explain what the storyline is really about - I think it is an eco-message but it goes about it in a long-winded way to get there, and even then it only surfaces at the end in a speech that lasts about 10 seconds from Hugh Laurie

Pre-teen pap - Tomorrowland: A World Beyond review by PV

This movie has its moments - most of them tediously predictable CGI-saturated seen-it-all-before scifi fantasy.

Deeply derivative in every way (even down to a soundtrack that rips off Star Wars) this is only for big fans of the genre. Clooney is irritating as ever and I never believed the Hugh Laurie characters (watch House instead!)

One to put on for the kids while you go and do something better instead! 1.5 stars rounded up.

Tomorrowland: A World Beyond (aka Tomorrowland) review by Mark McPherson - Cinema Paradiso

Brad Bird’s Tomorrowland is a rather inspirational film with a muddled sense of subtlety. It wants to have fun with imagination, but also wants to boast a bold message of optimism towards a world of disaster. When a young boy presents a jetpack to a World’s Fair judge, he argues its legitimacy by stating “can’t it just be fun?” It’s a question that I too was asking when such an ambitious film becomes darker and murkier than it needed to be. When the film isn’t a hard-lit commentary on the decay of humanity, however, it’s bursting with imagination and inspiration for a future of technological wonder and boundless ideas.

You can certainly see a lot of Brad Bird’s childhood wonder for an era that seemed to promise flying cars and cities on the moon. In the opening scenes, a plucky young Frank Walker seeks to prove his worth at the 1960’s World Fair. He befriends a mysterious girl, follows her through a secret passage of the “It’s a Small World” ride and ends up in a towering metropolis of the future. Robots build bridges, monorails run across the city and art deco skyscrapers seem to go up for miles. Zooming around in his homemade rocket pack, Frank is beyond words at endless amount of potential for the future of technology and discovery. He embodies all the starry eyed dreamers of a new age.

Fast forward to the 21st century and Frank (George Clooney) is now a bitter old man. His dreams are dashed by a hopeless world of diminishing innovation. He has literally been kicked out of the future he desired to create by the shrewd overlord Nix (Hugh Laurie) who spits on the world that wouldn’t listen. Exiled from a potential paradise, Frank spends his remaining days in his 21st century bunker of a secluded home counting down the days until the world will end.

And that’s where the next generation of pluck is recruited to save the future. Our messiah for this sci-fi adventure is the rebellious Casey Newton (Britt Robertson). Her dad is about to lose his NASA job and Casey is using her destructive creativity to prevent the dismantling of a rocket launch site. That tenacity for science attracts the attention of future robots that either want her to help or want her dead. For her recruitment, she’s given a special pin that allows her to view a hologram of the glorious future packed with spaceports and jetpacks. Thirsty for more, she teams up with the bitter Frank and the smart-mouthed android Athena (Raffey Cassidy) to bring about hope for humanity’s future. This can apparently happen if you just believe in change as Casey’s simplest of words make the literal doomsday probability machine go down in percentage of likelihood.

Ever since The Iron Giant, Brad Bird has been making a name for himself in action from the zippy superhero adventure of The Incredibles to the fast paced stunts of Mission Impossible: Ghost Protocol. He does not disappoint with Tomorrowland. The entire first act of Casey running from robot hitmen is incredibly exciting with a chase that leads from a collectibles store to Frank’s house of technological horror. All sorts of strange and cool weaponry is used from plasma cannons to portals to magnets to some comically oversized ray guns that appear straight out of a 1950’s B-movie. It’s essentially a slick looking sci-fi action film for kids that never feels dumbed down for them.

But when we get to the second act, the plot becomes far too heavy-handed and almost spoon-fed about impending doomsday. We can gather as much that something terrible is going to happen to Earth given Frank’s doomsday counter, the constant news footage of environmental disasters and even a visual record of Earth’s events that lead to global extinction. As if all that weren’t enough, Nix ends up delivering the longest of bad guy rants about how humanity is to blame for all the terror that befalls this planet. Of course, our heroes must prove him wrong, but that amount of time we spend on the corruption of society leaves the audience questioning the true message of the film. From the many examples of encouraging doom, Nix cites that dystopian media makes the masses flock towards their demise. Does he want me to feel terrible for giving a positive review to Mad Max: Fury Road? He truly is a villain!

Muddled as it is, Tomorrowland’s heart is ultimately in the right place. As heavy-handed as most of the dialogue becomes, there are a handful of insightful words. Frank addresses a crop of young invention recruiters about how it’s not hard to take down the big evil tower, but it’s harder to find something positive to build in its place. Tomorrowland doesn’t offer up any solid solutions to the world’s problems, but encourages the brilliant minds to go out and find them. I’m happy for the youngsters who will see this film and perhaps receive some sort of inspiration to pursue a path that betters mankind. I just wish there were a few more fantastic elements of adventure to cushion the blow of the movie’s message like a sledgehammer to the head.