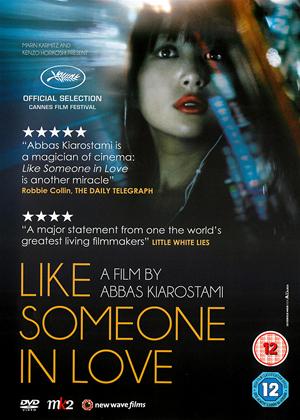 Synopsis:
Abbas Kiarostami is indubitably one of the most important film-makers in the world, and this, his second made outside Iran, is set in Japan.
A student moonlighting as an escort goes to visit a client who is more interested in talking, and who the next day takes on the role of her grandfather when confronted by her jealous boyfriend.
It pays homage to the tradition of Ozu, but is very much a typical Kiarostami work with its oblique narrative, mistaken and assumed identies, and masterful sleights-of-hand upending the audience's assumptions.
Actors:
Rin Takanashi, Tadashi Okuno, Ryô Kase, Denden, Reiko Mori, Kaneko Kubota, Ryota Nakanishi
Directors:
Abbas Kiarostami
Producers:
Charles Gillibert, Nathanaël Karmitz, Abbas Kiarostami
Writers:
Abbas Kiarostami
Aka:
The End
Studio:
New Wave Films
Genres:
Drama, Romance
Countries:
Japan, Drama, Romance

I think one of the things we don’t like to admit about film-makers, is that the older they get, the worse their films tend to be. Not an authority on the matter but Quentin Tarantino famously said as much, and while it’s not true in all cases, it is in a lot. Far be it from me to put forward an ominous conclusion right off the bat, but the reputation of Abbas Kiarostami – the Iranian film-maker who once made fantastic films like A Taste of Cherry, and Close-up – is in a bit of a slump. Judging from his last two efforts: Certified Copy and Like Someone in Love, he’s become more inclined to follow the less interesting parts of human relationships, rather than command our full attention.

The film follows the exploits of Akiko, a sociology student living in Tokyo who moonlights as a high-end call-girl. Her fiancee is suspicious but unaware and for the past several years, she’s been servicing the needs of wealthy individuals. One night, she’s assigned to Takashi Watanabe, an elderly University professor - conveniently an expert in Sociology, her own subject of choice. But he's more interested in making her dinner than succumbing to the pleasures of the flesh, and the two strike up a friendship which is marred by the introduction of Noriaki -- Akiko’s boyfriend, a garage mechanic who thinks Takashi is Akiko’s grandfather.

Above all, Like Someone in Love is a film about strange relationships, marked by coincidence and ordinary human deception. Akiko represents this best of all, splitting herself between two personalities: one known by Takashi, and the other known by Noriaki. Initially separate, these collide and the film's main conundrum (Akiko's secret life) comes forth: a problem which shifts a radically sombre first-half to something more anxiety inducing later on. Watching on the side, we’re presented with an uneasy (and voyeuristic) level of elevation: a over sense of knowledge that makes us constantly wonder when the truth about Akiko’s secret life will finally reveal itself.

This is cemented by a long scene mid-way through the film where Watanabe drops Akiko off at school. Waiting for her because she turned her phone off the previous night, Takashi is introduced to Watanabe. The two strike up a kinship marked by nothing more ordinary than a bold lie. Further coincidence ensures that Noriaki eventually finds out the truth, and the slow presentation of drama takes on a new form resulting in a final stretch that culminates in Noriaki’s intense anger. In the mean time, Kiarostami’s scenes are made long and drawn; like Korean film-maker, Hong Sang Soo, they linger and ask nothing more than acceptance of realism. In fact, the story is really so unremarkable that it becomes remarkable simply through its presentation on film. Kiarostami avoids cliche and one-dimensional characters, and his off-hand style ensures that a rational reaction is prized over an emotional one.

Potentially not, although I'm sure dyed-in-the-wool Kiarostami fans will get something out of it. If you're looking for a contemporary Kiarostami then I'd suggest renting Certified Copy over this one. I don't know why, but I expected to see more of Japan's seedy underworld - it's definitely not that kind of film.

To finish watching a film and to still have very little clue as to what it was really about is a special thing. It isn’t a good experience, it isn’t a bad one but the films unanswered questions prove too many to ignore as Like Someone in Love treats you to a morally complex story with almost no conclusion, no opinion or anything resembling an ending, in fact it leaves you as empty as the film's main character, someone whose lies have finally caught up to her.

Like Someone In Love follows Akiko (Rin Takanashi), a prostitute who is trying to keep the lies she tells straight in her own head as her boss, boyfriend and family begin to hone in on what she really does. When she is assigned a new client, old man Takashi (Tadashi Okuno) she spends the next few days being reintroduced to the feeling of real affection but the remnants of the life she has led threaten to harm the new relationship these two have developed.

The two days these two spend together are unconventional to say the least and filled with unspoken nuances as Akiko and Takashi try to understand one another. Takashi, someone uninterested in the true purpose of Akiko’s employment is a kind and loving man, a widower who seeks some kind of connection to someone that isn’t his irritating next door neighbour. Akiko just wants some place to plant her feet, to escape the life she has created for herself.

Together they understand each other even if the words arent said. However the whole film is mostly unspoken sentiment as the two playfully navigate each others lives while trying to remain respectful and polite. The whole film doesn’t have time to properly breath as the film ends sooner than it should. The ending is rushed and unlike the rest of the film. Although there is a note of finality it leaves everything to the imagination, maybe too much in fact as Akiko brings about a slightly cringe inducing endnote.

Ultimately a tale of unconditional love and care, Like Someone In Love delves into the lives of Akiko and Takashi but it never really gets to know them, leaving them just two unanswered questions on top of the rest.