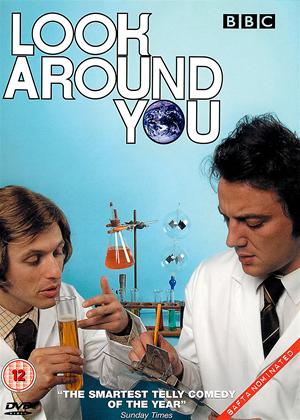 Reviews (1) of Look Around You: Series 1

Don't try this at home! - Look Around You: Series 1 review by Count Otto Black

These odd little shows (each episode is only 10 minutes long, apart from the 20-minute pilot) rely heavily on a target audience who no longer exist: viewers old enough to remember television for schools c. 1980, but young enough to automatically fall about with laughter at the sight of retro technology. If you're too old to watch kids' TV ironically, you'll probably find these spoofs gently amusing rather than uproariously funny, and if you're too young to recognise a Dymo embossed label, you may find this 2002 series as dated now as the genre it parodies was in 2002.

Fortunately, it has enough inventiveness to partly get around the fact that sticking Dymo embossed labels on absolutely everything and having men in lab-coats constantly point at stuff with pencils isn't intrinsically hilarious. It's at its best when the scientific facts it solemnly informs us go beyond being wrong or even absurd and become downright surreal. For instance, when the already ludicrous experiment of mixing sulphur with champagne for no apparent reason produces results you definitely won't be expecting. At such moments it resembles a broadcast from some parallel dimension whose technology isn't quite as advanced as ours, and where the laws of physics seem to have been written by Bart Simpson, Salvador Dalí and Gandalf. If they'd gone with that approach throughout it might have been truly first-class comedy.

What puts it firmly on the B-list is its over-reliance on the assumption that cheap schools programmes from a long time ago that even their target audience only watched because they were literally forced to are funnier than they actually were. Sequences where dull experiments to prove something banal are over-described and the only humorous element is that one piece of the lab equipment has a silly name feel like padding, as if these 10-minute shows started out as 5-minute segments in a sketch show. And even if you find the concept hilarious, parodying a genre as tiny and specific as this inevitably limits the possibilities more than would be ideal.

It's kind of amusing in a low-key way, with moments of inspired lunacy that have the warped logic of those uneasy dreams where everything is disturbingly off-kilter but nobody notices. I wish it had all been like that, but I suspect the writers simply didn't have the imagination to come up enough truly weird material. The fact that programmes only 10 minutes long sometimes feel padded suggests that may be the case, and the abysmal second (and final) series, in which a very similar premise was stretched over half an hour, confirms it. Still, at its best it's very funny indeed, and even the worst bits are, in this short and snappy first series at least, over before they've outstayed their welcome too badly.

By the way, the DVD menu is ridiculously cluttered and rather annoying, but don't forget to check out the extras, because they include a 20-minute pilot episode with some of the best jokes in the whole series.