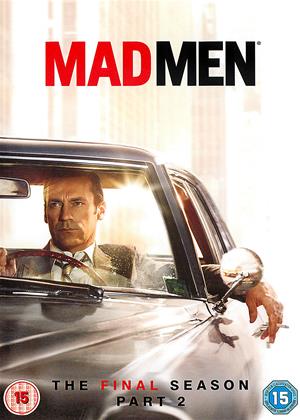 In the final season of Mad Men, there’s a sense of an epiphany for these characters that have worked their way up the advertising chain. They have just about discovered what is important in life and what they need to do for themselves as they proceed into the 1970’s. As time goes by and goals are met, the intentions of these characters that may seem strange and odd begin to make more sense. The clock is ticking down on their lives and time is running out to find that last glib of happiness.

No character realizes this more than Don Draper. After witnessing Bert’s death, he’s become bitter and shaken. Life begins to crumble for him once more in both his career and personal life. He wants to find an out - somewhere or some state where he can be honest and at peace. All of the characters face a similar dilemma in looking ahead to the future. Most of them have that nice place carved out in the form of a new partner, a reconciling with family or that big promotion. Don has a larger mountain to climb and far bigger hurdles to get over. That’s not to say the other characters don’t have their own grand moments of revelation and closure for what matters most. Peggy finds herself conflicted about the changing structure of the business after being gutted and restructured. Joan is presented with a wonderful opportunity to start over with someone new at the cost of her business. And Pete makes one last effort to pull himself back from the brink he forces himself towards everyday.

For most of the season, we see Don driving to both escape his life and find the one he wants. He sets out on the road to take odd jobs, pick up drifters, confess his sins to strangers and make peace with those who mean something to him. Don doesn’t have an exact plan or direction unlike the other characters that have a few bumps to iron out in their personality. The more he progresses in his journey, the more he learns to come to terms with himself and let go of what he cannot change.

This last half of the seventh season is certainly the most divergent and compelling of the series. There’s a sense of purpose that runs through the minds of these characters with goals that cannot be clearly defined. It’s a certain sensation you can only feel once you’ve made it to the top of the corporate ladder or spent enough years trying to climb it. You look down and realize what you’ve left behind. You look up and see a dark cloud. There’s an emptiness to it all. Your job ceases to label you or your life. There’s a twinge of your worth in the universe that digs down and picks away at your soul.

It is the reason why many of these episodes take place almost entirely outside the office with very few involving actual advertising work. This is the final curtain and we want to see these interesting characters from different angles before they leave. And this season more than any other reached deep inside their hearts and pulled out as much of their internal workings as possible.

I can’t think of a more fitting way to end what has been the most enduring and thoughtful television program of AMC. It resonates all too well with those that have grown weary of the corporate game and desperately seek a means of cashing out their chips. Whether they were bored with their jobs or suddenly just clicked, it’s a suitably happy ending for characters that have gone through so many indecent hoops seeking forgiveness. If the ending seems too out there and oblique as you don’t quite understand the reasoning for Don’s actions, then don’t worry. If you continue to work at a corporate job, seek companionship in a partner and maybe have children, all of this makes sense after a few years on the job. It’s a morose feeling of just finding out what is most important and that it may be out of reach if you don’t take that jump. And, thankfully, Mad Men wraps everything up from a satisfying psychological conclusion that makes the future both tearfully fearsome and scarily exciting.