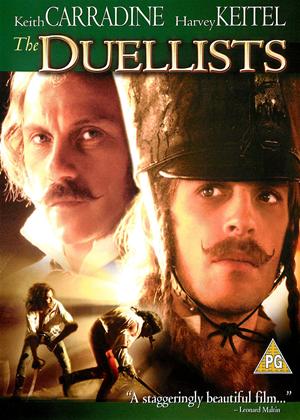 Reviews (3) of The Duellists

Ridley Scott's first feature is a study of honour, war, and the futility of violence.

Keitel,and Carradine play two napoleonic officers, locked in an ongoing duel. It goes with them out from France across thirty years of war, and returns back again, mirroring the fortunes of Napoleon. The cause of duel, never obvious, becomes increasingly unclear as the film progresses. It shows Kietel as a bully, and Carradine as a reasonable man trying to live by a code of honour he respects, but doesn't understand.

The film is beautifully photographed by Frank Tidy, with Scott himself operating the camera. The duels are if you like the set pieces of the film. They are almost formally choreographed, with Scott's direction keeping them edgy and dangerous. The final duel gives an interesting, and unexpected finale to a fine film. It rightly won Scott the best first work award at the 1977 Cannes film festival.

The minimal plot of Ridley Scott's debut film puts Keith Carradine's thoroughly decent hero in a classic nightmare scenario. Due to the conventions of his time, class, and profession, he is obliged to put honor above all else and, if necessary, fight duels for extremely minor reasons, and he has the misfortune to offend a completely bonkers fellow officer (Harvey Keitel) who insists that they fight to the death for essentially no reason at all. And, like the Terminator, Keitel's psychotic antagonist simply will not stop until one of them is dead. Which would make this a very short film, were it not for the repeated failure of both men to finish the job.

The atmosphere of the Napoleonic Wars is beautifully realized, and although the modest budget doesn't permit any battles to be shown, we're constantly aware of the effect the conflict is having on everybody (in this respect, as well as the increasingly obsessive adversarial relationship between two protagonists who seldom meet, it's similar to "Witchfinder General", which I suspect may have been a major influence). And the multiple duels are excellent, running the full gamut from gentlemanly swordplay to bloody savagery to mirror the escalating irrationality of why these men are trying to kill each other.

Where it falls down a bit is that Ridley Scott's weaknesses are on show almost as much as his strengths. Stacy Keach inexplicably provides a voice-over (thankfully not very often) even more insulting to the viewers' intelligence than the one in "Blade Runner", and sometimes, especially in the last third, he's so busy showing us the "Pride And Prejudice"-style good life c. 1800 that the pace flags badly.

Also, although Keith Carradine is mostly pretty good, there's one scene where he shows the absolute terror of a man forced to risk his life for an utterly senseless reason which had me thinking that if his entire performance had been like that, I would have been on the edge of my seat, instead of frequently noticing how well the scenery was filmed (or occasionally wasn't). If an actor is capable of giving that kind of performance some of the time, a truly great director will concentrate on getting it out of him all of the time. Instead, Scott ruins that particular scene with clumsy, confusing flashbacks and muddled continuity, as if he's making a 30-second commercial for hitting people with swords on horseback.

This is a good film (with a very unexpected yet oddly perfect ending), but it's no masterpiece. In particular, I would have liked Harvey Keitel's one-dimensional villain to have been given far more characterization, because although Keitel is very convincing indeed, there's only so much you can do with a cardboard cutout. And watch out for the scene near the end where a tense situation is rendered Pythonesque by the meaningless inclusion of the rear half of what is clearly a stuffed donkey. You'll definitely know it when you see it...

An entertaining and intelligent film with beautiful photography.