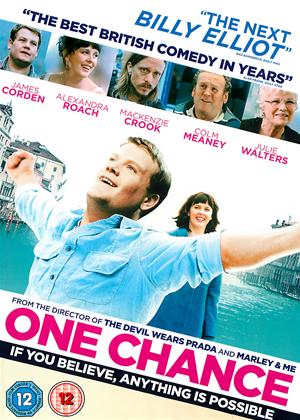 Reviews (3) of One Chance

It is what it is - the story of a bullied underdog, Paul Potts, who ends up winning a talent contest and escaping the awful provincial industrial town where he grew up, and works as a salesman in Carphone Warehouse, to become a professional opera singer.

So it's predictable and we know the ending - but the journey is done so well. This is very well-written and structured - there are lots of laugh out loud lines which are genuinely funny - and the acting is spot on. Julie Walters, Mackenzie Crook et al - and the best Pavarotti impressionist I have ever seen! James Corden fits the role perfectly - I don't usually like his work, esp when it's too slapstick and loud, but he is perfect here (though thank goodness Paul Potts provides the voice). The change from childhoods to adulthoods is done brilliantly too.

Nice to see a usually unfilmed part of Britain too - Port Talbot in South Wales - a dead-end steel factory town which is contrasted here with the sublime city of Venice. The detail is spot on, though I was trying to work out Paul's age all the time.

I could watch this film again and again. The music - classic opera - is of course wonderful.

2 small gripes - on occasion, Corden lets the accent slip slightly into London-ese. However, it is true that people all over the UK pick up and speak in a London way now, so maybe that's OK. Also, Potts was born and grew up in Bristol (the film is BASED on truth only; his father was actually a bus driver not in a steel factory).

The second gripe is that when they sing 'for he's a jolly good fellow' they don't say 'and so say all of us' but the American 'which nobody can deny'. However, again, many people now - especially the working classes - do ape American expressions (happy NEW year, and not Happy New YEAR as we used to say...)

Anyway, this film is warm and funny, and gives hope to all underdogs who want to have a go and find their one chance of making it and following their dreams. It's a lovely fairy tale, basically!

Using just about every cliché in the book, this is a feel-good film about a man from an unpromising background overcoming adversity to become an opera singer.

It's a biopic of Paul Potts (played by James Corden) who rose to fame by winning the first series of 'Britain's Got Talent' in 2007, singing 'Nessun Dorma' in the final. [Aside: The singing in the film really is Paul Potts]

Bullied at school, met his girlfriend via Internet dating, performed in amateur operatic productions, went to Vienna and was critiqued by Pavarotti, had a crisis of confidence, entered a TV talent show, became famous. Not a bad story and quite entertainingly told.

There are a few liberties taken with the facts though, not least that he grew up in Bristol, went to university and became the youngest-ever local Councillor and served for 7 years. Doesn't sound like someone with no self confidence to me...

While it's not my usual cup of tea, I enjoyed this film - apart from the music, it made me smile quite a few times. 3/5 stars.

[Aside: I was privileged to see the great Pavarotti twice, at Manchester's (then) G-Mex in 1991 and as one of 'The Three Tenors' at Wembley in 1996]

Not so good - One Chance review by BE

I found this movie about BGT winner Paul Potts disappointing. Although it's a true story, it presented as contrived and fictionalised. James Corden looked out of place as the subject matter and didnt appear to be comfortable with lip syncing operatic songs. I expected more.

Any tale that includes a segment devoted to Britain’s Got Talent, even if the story happens to be true, has to be taken with a grain of salt. Not only are some of the things that happen in One Chance completely unbelievable but the whole film is an exercise in serendipity. The whole thing doesn’t quite feel like the story of a life but the mish mash of random occurrences that get him to the woman he loves. Not that theres nothing wrong with that, it’s just not really the film that was people were sold.

The film follows real life opera singer Paul Potts (James Corden), a welsh Carphone Warehouse worker whose life long dream to sing opera becomes a reality when he is accepted at a Venician opera school. However just before he leaves he meets the bubbly Julz (Alexandra Roach) and a romance starts that will define the rest of his life and the steps he takes to fame and fortune.

Most people in Britain know the story, well most of it, but One Chance tries to dig a little deeper as it must. However to do so the film creates a character so helpless but also so sweet its practically gag inducing. He comes across as a saint, someone sent down to live with us mere mortals to improve upon us some how. There is no real character to Potts beyond his impressive lungs as the film fills in the public tale with a few ideas of its own, some of which are so dubious its hard to tell whats real and what isn’t.

As romantic fiction however, One Chance is lovely, a real treat as the budding relationship between Paul and Julz is touching and the far more interesting element of the biopic. Not only is Roach a real treat as she brings colour and life to the devoted shop girl but she makes the whole story believable in some ways, with her unexpected devotion to Paul. Corden doesn’t really change up his regular character but thats what makes him perfect for Potts as he makes the overly simplistic characterisation work for him with some subtle comedy.

The film might not be Mandela or Capote, it might not tell the tale of a truly inspirational leader in their field but it is an awful lot of fun