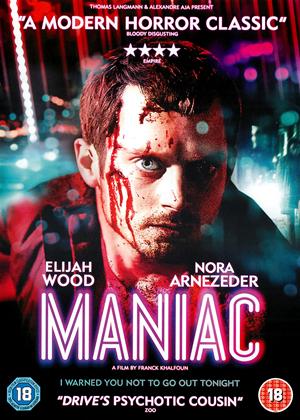 Through a maniacs eyes - Maniac review by CP Customer

A film with a unique approach to the popular tale of a sexual predator in that we experience the journey through the killers own eyes and hear his inner thoughts and mental battles as he is faced by his own crimes. Not particularly scary or thrilling but somewhat fascinating nevertheless.

Another modern remake of a famed horror film from the early 1980’s Maniac is the story of a mannequin shop owner who becomes obsessed with an artist. There is really very little else to say about this particular story line, as by and large, the story here is almost irrelevant. What is important however is the painfully gory murders and crazed but driven characters.

With Elijah Wood in the lead role as the murderous Frank Maniac is a, unlike many of it’s recent remade peers, not a shot for shot reproduction of the original, yet it successfully manages to adhere to the same sense of intensity inherent in the original, conversely however it makes attempts to differentiate itself from William Lustig’s original without digressing too far from it’s roots.

A clever use of first person camera helps make the updated version of Maniac just as blisteringly intense as it’s predecessor whilst the violence of the various and inevitable kills is genuinely disturbing. For horror genre fans this is sure to become a guilty pleasure piece; and although the film is fairly predictable in its outcomes it certainly ticks all the correct boxes for those looking for a good show of gore.

The one truly interesting aspect of the film that is certainly worth mentioning is Elijah Wood’s performance as the maniac in question; we couldn’t be further from harmless hobbits here as his fantastically powerful gaze seems almost to drill through you with a violent determination. Overall Maniac is far from the greatest horror film to be released last year, although as remakes go its combination of European ethos and American narrative made a pleasant change.