Rent Metallica Through the Never (2013) 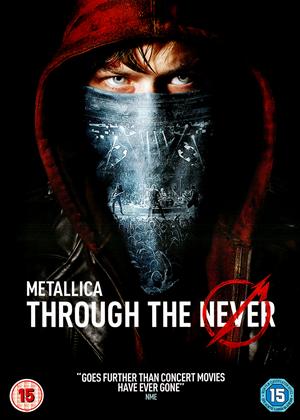 Reviews of Metallica Through the Never

Metallica Through the Never review by Alyse Garner - Cinema Paradiso

A band that was already known for it’s showmanship Metallica have joined forces with Swedish born Nimrod Antal to create a hugely ambitious project that is much more than your average concert DVD.

A sensory explosion this 3D movie combines both the music and performance of the hugely popular metal band with a strange and yet surprisingly complimentary narrative about an unnamed roadie who, in the midst of setting up for one of the band’s biggest concerts, is tasked with a run-of-the-mill mission and somehow stumbles into a surreal sub-world of Metallica music and visuals.

Not being a particular fan of the band myself there wasn’t a great deal here for me to enjoy, though I can appreciate the sheer magnitude of the project and this aspect of the film alone is accomplished successfully and impressively.

Fans of the band are likely to get even more out of the piece than the average Joe; it’s just as loud and aggressive and assertive as the band themselves and every scene is underlined with the wailing guitars and growling vocals the band are most well known for.

The theatre experience of the show was quite mind blowing, as a DVD reviewer however I can’t help but have a little concern for how well the piece will translate onto the smaller screen. My suggestion to those hardcore fans looking for the full experience is to gather in front of the biggest screen you can find and hook it up to the most impressive sound system you can get your hands on and simply enjoy the show – otherwise I fear you may be a little disappointed.