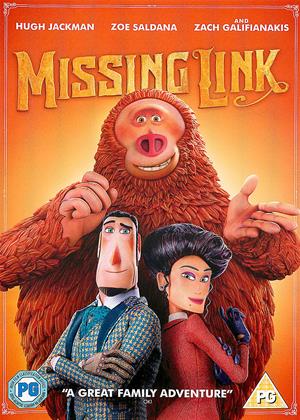 I hope this animated feature isn't "missing" next to some of the big studio productions. Self-centred explorer Sir Lionel Frost goes to America to discover "The Missing Link"... No, it wasn't Boris Johnson, but a friendly, lonely soul who dreams of finding his own Shangri-la in the himalayas with kindred spirits of the Yeti. Along with a feisty Spanish woman, the three set out on a big adventure, but there are some bad guys who want them to fail.... Charming, funny, good characters, nice animated style, and a sweeping adventure spanning several continents. The moral of the tale is not to be too self-centred, value true friendship, and to accept that perhaps all your dreams and goals might not be as you hoped they would be. Like everything in Life really.

We all watched this, that's 2 40 year olds and 2 teenagers. We all thought it was a average film. Took a while to get going and unfortunately I think it's a film we are all going to forget pretty quickly. Having said all that, the animation was very good.

Bit of a dud! - Missing Link review by AM

To begin on a positive, the animation is quirky. So that's fun.

The opening scene is also great fun with the Loch Ness monster. The main character starts off as a huge over the top caricature, which seemed like it might lead to a lot of fun and adventure further in the movie, but he turned out to be a bit normal and rubbish as the character is developed in the tale. His adventures got less and less exciting as the film went on. And he became less and less worth watching.

With the different characters (heroic adventurer, soft-hearted lonely giant, feisty female, evil empire-minded baddies) you'd think there would be a bit of comedy potential? But they even failed to harness physical humour, which might have rescued the film.

Its been a week since I watched it and I can hardly remember anything about it now.

It looked like it had potential, but they managed to avoid fun in this movie. Perhaps they weren't looking for it.

Some people might enjoy it despite (or because of) that I suppose, but I didn't.

Laika really doesn’t get enough credit for being a stop-motion studio on the cutting edge of brilliant technique amid original and engaging stories. Time and time again, they’ve proved to not only keep up with the stop-motion giant Aardman but even surpass them in their ambitions from Coraline to Kubo and The Two Strings. Missing Link is yet another example of how they continue to create amazing films out of unlikely premises, even if Link isn’t as much of a masterpiece as their previous works, albeit still a lot of fun.

This type of story could’ve easily been a forgettable comedy if tossed around a bigger, more commercial studio that had to meet a certain marketable appeal. It’s the story of Sir Lionel (Hugh Jackman), an amateur explorer who is hoping to prove to the world that such mysterious monsters of the Loch Ness monster or Bigfoot are real. Specifically, he wants to prove it to a stuff explorer club of his 19th century England home. They’re not buying his lacking evidence, especially the closed-minded Lord Piggot-Dunceby (Stephen Fry), hoping to keep things the way they are and shoot down ideas of Lionel’s acceptance or evolution itself.

But then Lionel receives a hot tip about Bigfoot being spotted in the state of Washington. He ventures out to a logging community to discover the beast residing in the woods with a rather peaceful personality and lifestyle. Bigfoot (Zach Galifianakis) turns out to be a nice monster with his clear English and ability to write rather well. But he’s not accepted among his community that only spots a terrifying beast. And so Lionel agrees to help escort Bigfoot to a new home in the Himalayas in exchange for proof of his existence. Of course, he’ll have to avoid everyone who has it out for both him and his tall new friend.

The real power of Missing Link lies in its genuine nature for its blunt themes and charming character. Along the way, Lionel will employ the help of Adelina Fortnight (Zoe Saldana), a widow to an adventurer hoping to step out on her own and bury her troubled past with Lionel. Seeking to kill both Lionel and Bigfoot is the hired gun Willard Stenk, perfectly voiced by Timothy Olyphant as a bounty hunter who cares more about hate and pay than allegiance and humanity. And there’s a Yeti overlord voiced by Emma Thompson who looks down upon the world with fearful eyes for those who do not understand.

As if it weren’t obvious from these characters, there’s a clear and hammered message about progressing in society and not relying on the validation of others to be an individual. Too blunt? Maybe but it helps to spell things out a little clearer to the younger audience. Don’t worry; Missing Link is still a great comedy of the buddy nature between Lionel and Bigfoot. Whereas Lionel has a wit to make his ego trip a more pleasing sense of discovery, Bigfoot’s literal nature in holding conversations makes him the perfect pal for funny. He’s big and dumb but never seems to be trying too hard for a laugh or slapstick the way he stumbles with a well-meaning and gentle nature. He doesn’t want to hurt anyone or break anything but just look at him. You can’t have an eight-foot friend weighing over 600 pounds and not expect him to break a few chairs or bonk his head on some low ceilings.

It’s sad to say that Laika wasn’t much of a hit at the box office. In a crowded market of big films gunning for lots of marquee value, Missing Link should be celebrated more as a film doing great things with animation while conceiving original and telling stories. It’s gentle with characters but still willing to go for more exciting action sequences of bar brawls and hanging from icy cliffs. The comedy is delightfully charming and slapstick but never goes out of its way to be mean for the sake of a laugh. And it’s just a generally gorgeous production that is unlike any other animated film out there. I don’t know how much longer Laika can last with great films that don’t make money but I can only hope they last a long time as the stand-out studio of the stop-motion medium.