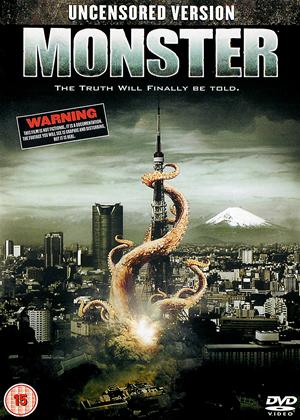 Ah, video-cam distortion. Where would films like this be without it? Actually, there aren’t many ‘films like this’, although the found footage genre remains a fairly popular one. Fifteen years before ‘Monster’, ‘The Blair Witch Project’ proved you could record a film cheaply from the point-of-view of the characters, and make a critical and financial success of it. Indeed, a common problem you would have if you *really* were to make a home movie in extraordinary circumstances, would be to have sound problems that rendered portions of the dialogue inaudible and lighting issues often making it impossible to work out what was happening. As a commercial venture such as this, these shortfalls just smack of bad film-making. And sadly, ‘Monster’ is a bad film.

The Asylum is a direct-to-video company who have had some success, and some notoriety, producing minimal-budget films in a bid to capitalise on major Hollywood projects of the time. ‘Monster’ is their version of ‘Cloverfield (also 2008)’, in which an outsized creature terrorises a city. Here, two silly girls travel to Japan to produce a documentary about global warming, a world-threatening issue reduced to a wacky school project. Whilst they are there, an earthquake occurs. We know this because there are plentiful overlaid sound-effects of carnage and a very un-Japanese-sounding people panicking. The video-distortion I mentioned kicks in at moments when otherwise we would be treated to a visual representation of the disaster, and saves the production team (if there is one) the trouble of providing any expensive set-pieces. You want a city being destroyed? Shake the camera and apply some break-ups and pixilation problems – that’ll convince the audience something terrible is happening. Of course, when things are calmer, there is no need for distortion and the visuals are as clear as can be.

It is the contempt in which the audience are held that disappoints. The project is massively too ambitious to ever work with such slender means, and to expect anyone to invest in what is at times a brazenly amateurish production such as this is either asking too much, or simply having a laugh.

Sarah Lieving and Erin Sullivan look as panicky and dishevelled as they can without it affecting their looks too much – they even get a ‘Blair Witch’-style moment to tell their parents back home (this is Tokyo, remember) they love them. Bizarrely, they are prone to announcing “We are American,” from time to time, as if their nationality should make them immune from this distress. My heart goes out them though; they do what they can. And to be fair to The Asylum, we do get about thirty seconds of monster action as a CGI tentacled thing makes a lot of noise toward the end. If I had stopped watching halfway through, I would feel very short-changed; hanging around until the end softens my heart towards the production a little. At least it gives us an actual monster, albeit very briefly. The problem is, to reach this point, you have to sit through 90 minutes of a cut-price disaster film that simply cannot produce the goods. My score for this is 3 out of 10.