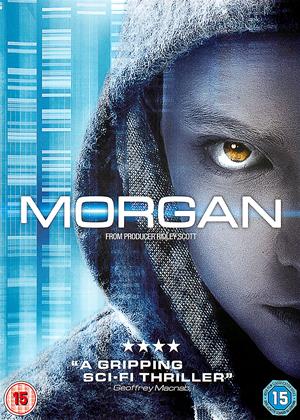 Morgan a suitable case for treatment - Morgan review by RP

A fine cast were obviously given the script for the first half of the film before they signed on. A philosophical look at gender engineering, life and what happens when the life we make doesn't want to behave in the way we want it to or expect. But then the second half of the film decided it has had enough with all that stuff and wants to play at Terminator. The pay off at the end is so predictable that anybody who didn't guess it from the first moment would have been a better person than me. On saying all this it is an enjoyable romp. But a romp instead of a better film that it could have been.

A fantastic film, but I'm not sure why - Morgan review by RL

This is one of the most gripping films I've watched in a long time, although I'm not sure why. The story is ridiculously simple, none of the characters are that great, the score wasn't memorable. And it's a rip off of one of my top three films of all time "Hanna". However, I enjoyed every minute of it and frankly could have watched it for many more hours. Bemusing!

whats a little stabbing among friends - Morgan review by MA

nice short film,none of this 2hr plus nonsense.quite simple,similar to Ex Machina,not as good.Seemed to set up for existential questions on what is humanity on a more emotional level but turns into the terminator in the 2nd half.Worth a watch

Coming straight from the hands (and vision) of Ridley Scott’s youngest – Luke Scott – Morgan is a decent exercise in trying to provoke, astonish, mezmerise, and scares, not necessary in that order. With that being said, Morgan is nowhere near “Alien” level, which wouldn’t be achievable even with today’s standards of filming. That is to say, Morgan is a satisfactory attempt at existential horror that would most certainly appeal to those captivated by cult hits such as “Cube” or “Event Horizon”. Which by the way is me, so expect some bias in the following review.

The film starts off by introducing the audience with Lee Weathers (played by Kate Mara), a corporate risk management officer (talk about euphemisms) who is sent to investigate a recent, let’s say incident and leave it at that – for now. During her evaluation, she must assess the risk-to-profit ratio and find out what the hell had taken place there. And lo and behold: this top secret location features a peculiar individual named Morgan (played by the talented Anya Taylor-Joy) who comes with her own mysterious threads that slowly unravel into a captivating study of character and a mediocre exercise in plot. Take that as you will, but it seems like Morgan wastes so much potential based on its premise alone, which compared to the disjointed screenplay – produces a cinematic experience that is just “good enough” (instead of being excellent for instance).

To this extent, Morgan doesn’t address anything new really, but rather takes familiar science-fiction concepts and digest them through its own set of understandings and rules (as the director sees fit). For example, there’s the theme of creating life ex nihilo (out of nothing) and dealing with the moral consequences until it’s too late. The presentation of this theme is so-so, but the slow (and meticulous) buildup results in a satisfactory culmination deemed worthy for the ages. Which inevitably leads us to the performance of Anya Taylor-Joy.

Simply stated, this young actress’ approach to performing on screen is mezmerising, fearsome, and something to be on the lookout for. Her portrayal of an individual with a seemingly inexistent identity gives the character an emotional credence that stays long with you after the credits roll. Or to avoid beating around the bush: Anya Taylor-Joy is just excellent.

When it comes to the technical details, Morgan has it all: great cinematography (although the lightning could see some improvements down the line of Luke and his team’s future endeavors), the dialog is serving its purpose – with the screenplay being average at best.

Finally, if you’re fond of cinematic achievements such as “Event Horizon” and “Cube”, then Morgan will most certainly tickle your fancy. If not, it’s worth considering giving it a chance in the least.