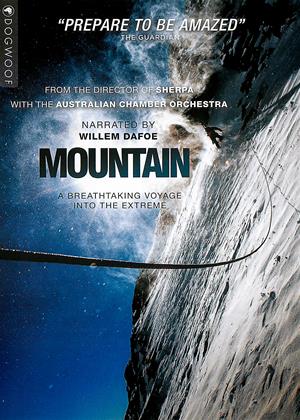 Synopsis:
A unique cinematic and musical collaboration between the Australian Chamber Orchestra and BAFTA-nominated director Jennifer Peedom, 'Mountain' is a dazzling exploration of our obsession with mountains. Only three centuries ago, climbing a mountain would have been considered close to lunacy. The idea scarcely existed that wild landscapes might hold any sort of attraction. Peaks were places of peril, not beauty. Why, then, are we now drawn to mountains in our millions? 'Mountain' shows us the spellbinding force of high places - and their ongoing power to shape our lives and our dreams.
Directors:
Jennifer Peedom
Producers:
Jo-Anne McGowan, Jennifer Peedom
Narrated By:
Willem Dafoe
Writers:
Robert Macfarlane, Jennifer Peedom
Studio:
Dogwoof
Genres:
Action & Adventure, Documentary, Music & Musicals, Special Interest
Countries:
Australia

Nice pictures, shame about the words - Mountain review by Alphaville

This is an hour-long picture-book documentary about mountains and the people who venture on them. We’re spared the standard TV close-ups of flora and fauna in favour of sweeping landscapes and daredevils doing their thing (e.g. rock climbing and base-jumping), which produces some exciting aerial images.

There are some filler sections (praying Himalayan Buddhists, a monochrome history of Everest etc.), but the main problem is the soundtrack. The film begins with an orchestra tuning up. It’s a collaborative exercise with the filmmaker, you see (the film premiered with a live orchestra). We are consequently subjected to an hour of clichéd classical music to accompany the pictures. Even worse is the horrendously portentous narration. Random sample: ‘Many who travel to mountain tops are half in love with themselves, half in love with oblivion.’ Pur-lease.

Nevertheless there are many arresting images, so turn down the sound, put your own music on, fast forward the dull bits and wallow in the mountains for a while.

Two stars for the various sequences of beautiful mountain ranges shot from helicopters, but that's about all the film has to offer.

The content of the voiceover could have been lifted from Pseuds' Corner in Private Eye, and the whole film has an ad agency sheen, an effect that is enhanced by the rich young white males who make up the visible human cast.

This is a Facebook meme level approach to mountains.

An oddly assembled collection of admittedly stunning footage. Almost as if it couldn't decide what it was about - a hymn to the unique beauty of mountains, an titillating adrenalin-rush for extreme sports obsessives, a nature/ wildlife programme, a historical essay on the development of mountaineering, and probably more. In the 'making of' extra, the producer admitted she had selected the best of 2000 hours of footage from all over the world - and quite possibly succeeded - but it doesn't make a good, coherent film.

And, sorry, but I found the music positively irritating at times.

This is an amazing documentary movie . Amazing photography of mountaineers doing scary things, with the awesome beauty of the landscape behind them.

It is a combination of music and images and is brilliant. Willum Defoe narrates, but mainly the director let’s the combination of the photography and music work its magic.

Spectacular collection of mountain scenery and clips of the jaw numbing sports tackled by the fearless. Willum Defoe narrates with a gravelly purr to the beat of the Australian Chamber Orchestra. Only a wee gripe, and don’t get me wrong, this is an amazing film but the title is a tad misleading. More about winter in the mountains than the rest of the seasons.