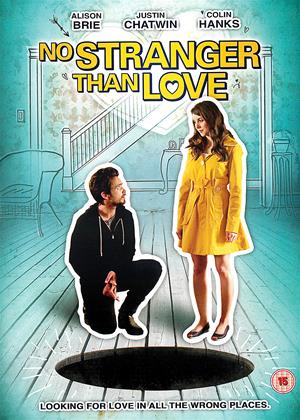 Reviews of No Stranger Than Love

No Stranger Than Love review by Adrijan Arsovski - Cinema Paradiso

Beautifully shot and diligently edited (to almost perfection, I might add) - No Stranger Than Love recounts the story of one Lucy Sherrington, whose life gets turned upside down since a recent encounter with her potential lover. No Stranger Than Love slacks along an atypical rom-com Twilight Zone premise that works – not so well as it should. But when it does, the audience is in for a treat of epical romantic proportions.

No Stranger Than Love is helmed by Nick Wernham and stars Alison Brie as the main heroine who lives in a small town and is cursed with one suitor too many that follow her along for the ride. Then, one day, as she professes her love to another male being, the unthinkable happens: he gets sucked in a black hole of abstract thought from which there is seemingly no escape. Ms. Sherrington freaks out (and who wouldn’t) after her efforts to retrieve her pretrial lover spectacularly fail.

From here onward, Lucy seems lost and takes the audience along for a ride.

As the story delves further into obscurity (in a good sense of the word), Lucy meets Rydell Whyte (Justin Chatwin) who tickles her fancy more than any other guy she comes in contact with. In a world/town full of weirdoes, Rydell is more than welcome a change in Lucy’s eyes and the two of them hit it off like two opposite swings at a Newton’s cradle. As the romance between the two deepens, so the mystery of the previous boyfriend’s disappearance thickens.

When said town of wonders discovers what betook poor Clint Coburn (played by Colin Hanks) – it was only logical for them to gather around Lucy and offer a lending hand. After which, some of the characters profess their true emotions and introduce the preachy in the film that somewhat distracts from the overall romantic flavor the film oozes most of the time. Then, the townsfolk discover the black hole into which Clint has collapsed, and everyone starts interpreting it differently – reflecting more upon their own character than serving as an explanation to his state of disappearance.

No Stranger Than Love is a peculiar story about life choices, wrong decisions and loves long lost. In actuality, the flick preaches against preaching, and in doing so comes off preachy. Fortunately, a detailed and carefully built camera angles fill the story’s shortcomings and provide for an awe-worthy viewing. The dialogue falters at times, but is immediately picked up during the third act of the movie after which it quickly redeems the mistakes to ‘watchable, but forgivable flaws’.

As symbols mediate between reality and fiction, Lucy finds herself stoically rectified in front of yet another hole, this time symbolizing God-knows-what. Yup, it’s left for the viewer to interpret whatever shenanigans happen next.