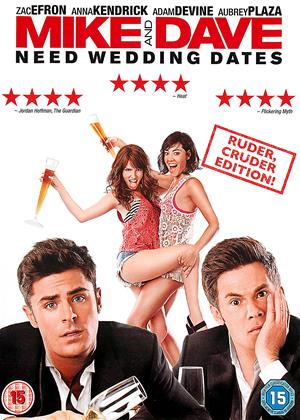 Rent other films like Mike and Dave Need Wedding Dates

What is it with recent self-proclaimed comedies that deter people from going out and enjoying them as such? Almost every half-baked film depicting drunken teenagers, kappa-gamma-omicron-abn-hassad fraternities-went-wild, barely covered girls and innuendos aplenty has met its demise at the box office. So, my question is: who in the right mind still makes these kinds of movies, and for whom? Kids don’t understand them, teenagers find them boring and not edgy enough, adults think they’re stupid, elders don’t even care – so what in the heck? Oh, and Mike and Dave Need Wedding Dates: don’t bother.

Zac Efron and Adam Devine play two guys whose thirst for partying can only be quenched by bringing wedding dates to a ceremony happening soon. Jeanie Stangle (Sugar Lyn Beard) is about to walk the isle and she can’t take any chances with the two stooges (also part of the family) who she knows are nothing but trouble. Soon, the brotherly duo post an ad looking for two nice girls to accompany them in the upcoming wedding and here enter Alice and Tatiana (Anna Kendrick and Aubrey Plaza, respectively) to the mix – who prove to be even worse under the calm façade they initially portray.

One thing leads to another, and what was planned as a ceremonious binding in the mesmerizing natural habitat that is Hawaii, soon ends up on the crazier note when Alice and Tatiana uncover their true, screwball personalities.

Okay, now the positives. Mike and Dave Need Wedding Dates feature two leads that sport mutual chemistry whose joke delivery timing is quite synchronized with the final punchline. Their back and forth banter usually ends up confusing them both more than before the actual conversation took place, and instead of a conversation that solves conflicts – their blabbering deepen their differences and open new scene possibilities that sadly, don’t get the treatment they deserve.

And this pretty much sums it up. The rest is filled with forced humor, bad jokes and annoying side characters whose presence made me want to punch the screen, then punch myself, and then enter in a symbiotic relationship with the monitor by becoming a Cyber Lieutenant from the 8-th negative dimension and fry my neighbors’ motherboards by forming a triangle with my three full-metal fingers – counterclockwise.

A key area where Mike and Dave Need Wedding Dates fails without precedence is character building and creation. Whatever chemistry Zac and Adam have is exhausted by implausible and unrealistic moves, pulled out by two guys who should exist in 21-th century America. It’s as if the jokes they find funny - viewers must take them at face value and laugh along with them – regardless of how bland they may feel. Cussing and swearing doesn’t help much also.

The only thing going for Mike and Dave Need Wedding Dates is the trailer, which is better edited than the whole movie. In 100 years, I’m betting Hollywood will invent a new Oscar category just to cover Best Trailers, home and foreign alike.