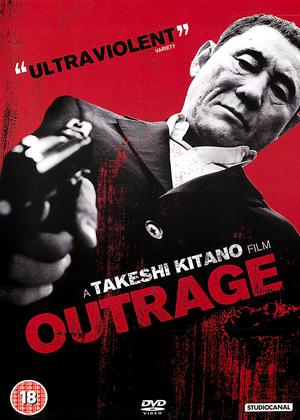 Not Kitano's best - by a long way! - Outrage review by MB

I usually really enjoy Takeshi Kitano films - both his directing and acting. However, this hotch-potch of a gangster movie was a real disappointment. The plot summary sounded promising - rival Yakuza clans double-crossing each other, and then double-double crossing. However, it was all a bit of a mess and confused, and by the fourth or fifth 'double-cross' I'd lost interest and didn't care who sided with who. And therein lies another problem - I didn't really care. They were all unpleasant, humourless characters. There are one or two moments of classic Japanese gangster violence, but not enough really to detain you. There are much better Japanese Yakuza and Kitano films to check out, so unless you're a real die-hard, you can give this one a miss!

Oh - and it was really annoying that this was a Japanese city with absolutely no people or traffic! Except for the gangsters. Highly improbable!

A Japanese gangster movie that made it all the way to last year’s Cannes Film Festival Outrage sees its director Takeshi Kitano in the starring role of a movie about the secretive gangster world of the Japanese Yakuza, who enforce strict hierarchy rules and behave much like a commercially functioning company.

The rather sickening twist however is that behind all of this commercialism Kitano shows us that every single one of these gangsters is little more than a greed driven and blood thirsty villains, in the worst and most honest understanding of the word.

The scary part is the way this brutal and bizarre hierarchy is leaked into the law enforcement community represented in the movie and the way that, on both sides, the most absurd and morally questionable acts are followed with a frightening attention to detail.

The narrative cobweb of the movie is easily the most impressive aspect of Outrage, where the entire plot hinges on the almost insignificant manipulation of a man in a karaoke bar. Also acting as writer and editor Kitano has weaved a fairly complex and intriguing story here and filled it’s exploration with painfully violent exploits.

The intensity of the violence is complimented nicely by the almost crazed pace of the later half of the movie when the strictly enforced hierarchy begins to loose control and people begin questioning orders. This all further enforces the comparatively peaceful and controlled portrayal of the world of the Yakuza at the start of the movie that so suddenly comes crashing down as the plot begins to unfold. For those who have a morbid desire to watch humans destroy one another, violently ripping everything the have, everything they believe and eventually the people themselves to pieces.