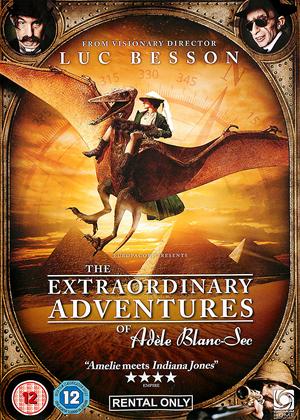 Rent other films like The Extraordinary Adventures of Adele Blanc-Sec

Reviews of The Extraordinary Adventures of Adele Blanc-Sec

Based on a French/Flemish co-produced comic book series of the same name Les Anentures extraordinaires d’Adele Blanc-Sec is a French language historical science fiction romance about a journalist who finds herself embroiled in a series of fantastical events circulating around Egyptians Mummies and resurrection.

Set in the early 1900’s the film has that charming comical and quirky French edge that you would expect. It tells the story of Adele Dry-White who is attempting to find a cure to bring her sister Agathe out of the coma she has been in for many years, following an unfortunate tennis incident. However this is secondary to the majority of the film’s narrative, most of which is taken up with the trouble surrounding the escape of a resurrected pterodactyl as it wreaks havoc on 20th Century Paris. This aspect of the film is its only weakness, as the story seems a little too long here. It is almost as though the film is trying to do too much in its short runtime, which makes some aspects of the film feel neglected whilst others appear to be dragged out.

This is hardly an issue however, as the witty script and excellent characters manage to keep you utterly mesmerized. The lead character in particular, the brilliant and feisty Adele is sure to make relative newcomer and French beauty Louise Bourgoin a star in her own right. Her acting is excellent and the character vivid and utterly loveable.

The film’s story is also complimented by the special effects, the design of the mummified Egyptians and dinosaur both fitting in brilliantly with the tone of the film, whilst the music can’t help but bring a smile to your face. Although the narrative is a little ludicrous the film manages to fall somewhere between childish madness and eccentric fantasy.

The film is an absolute pleasure to watch, its chic European and tongue in cheek style giving it the edge above other films that fall into such an odd generic category. The ending of the film promises a sequel, with Adele boarding the Titanic for a little holiday, this I hope to see on wider release in the coming years.