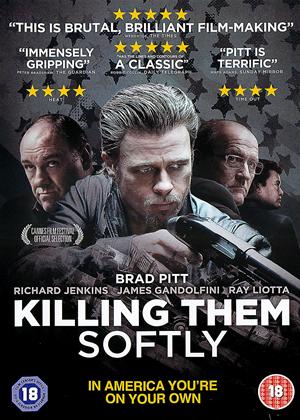 Reviews (3) of Killing Them Softly

Violent and tasteless. - Killing Them Softly review by RM

I just cannot understand how a film as bad as this can be made. The plot is thin and been better executed before (The Outfit or even Charlie Varrick) The latter thankfully had better acting, scripts, direction and less gratuitous violence. In this film the actors mumble a lot, the swearing over the top that covers up a dire script. The "F" word is used everywhere. This is an unpleasant, tasteless experience that is was happy to turn off.

Some good ingredients but overall average - sorry. - Killing Them Softly review by EP

Right, I like Ray Liotta, I like Brad Pitt and there are other big acting names in this film.

...it isn't engaging for some reason and you'll find yourself drifting off at times between some scenes, the violence is uber graphic, over stylised and not really necessary, perhaps the director thought it would be cool.

Anyway the story is 2 dumb guys and their dumb boss decide to rip off the mafia in a way that someone has done before because they think that person (Liotta) will get the blame. Brad Pitt is a mafia hit-man who "tidies up" after the event.

Liotta is great as he is most gangster films but this one seems to have him mis-cast as a slightly past it weak guy who gradually meets his demise. I won't say much more - no spoilers.

Anyhow, the 2 dumb guys are slightly comical but you never really empathise with them as they just seem irritatingly inept.

Pitt is good but he's just doing the usual cool character and going through the gears, all fine but rather 2 dimensional.

Overall you won't find anything outstanding about this film I don't think, it's fine for a Friday night light action gangster viewing and there are a few laughs of black comedy but I fast forwarded some sections as they just seemed to drag and were pretty predictable. It's a bit strange that the producers managed to hook such big name actors, the do their job fairly averagely, this film is not awful, just lacking somehow.

An unwholesome, violent tale with Brad Pitt as an unconvincing hitman - Killing Them Softly review by RP

What can I say about this, apart from the fact that I didn't like it very much?

It's based on an old (1974) George V. Higgins novel, updated to 2008 (dating by the political ads for Obama's election campaign, shown in the background) and set in a wrecked New Orleans, presumably the result of the 2005 Hurricane Katrina. This desolate backdrop and the economic recession is the setting for a complex mob revenge film - an amateurish heist of a mob-protected gambling game, followed by revenge on the operator of the game (Ray Liotta), the robbers, and the guy who set up the heist. Brad Pitt plays Jackie Cogan, a cynical hitman hired for the revenge killings, and there's a short appearance by the late James Gandolfini as another burned out boozy wreck of a hired hitman.

Unfortunately I didn't find Brad Pitt very convincing in his role. He's too pretty, not 'hard' enough somehow - and however much Mr Pitt tries to play the part of a violent, cynical killer, the less convincing he becomes.

Too much f-ing and blinding for my taste, a loose cast of characters acting out a loosely scripted and unwholesome, violent tale. It's sometimes difficult to follow who's who and what's what, never mind the fact that it's slow moving with boring dialogue. But the soundtrack music is good...

Apparently this was well received by the critics. I found it below average so I'll give it 2/5. Sorry, Brad :(

The 2007-2008 banking and housing crisis is easily one of the most notable American events of the 21st century alongside the September 11th attacks. But it’s a messy and complicated situation to explain that even the darkly enraging and elaborate The Big Sleep still makes the events seem overly complex. Killing Them Softly attempts to talk about this ordeal through the language mafia movies. It’s a not so subtle message picture about how America has become more of a dirty business than a true democracy.

The story takes place during 2008, though you won’t need to know this going in as the film goes out of its way to establish the setting. The very first shot features a speech by Barack Obama and two billboards for the candidates of Obama and McCain. Every television is talking about the financial crisis, every radio turned to a news station. As obvious as this staging makes the setting, I must admit it does seem a bit relatable. During this time, I found myself listening to the news way more often than I usually did, sometimes sitting in my car for over an hour to hear the latest on the crisis.

The central story is a seemingly standard crime tale of two low-luck criminals stealing from the wrong people. Rival criminal Johnny "Squirrel" Amato is hoping to rob a poker game of his nemesis’ gang and enlists the shady and stumbling crooks of Frankie and Russel to do the job. They’re amateurs but pay close attention to this scene when of the criminals is coaxed by the gangster Markie (Ray Liotta) that he’ll let him go without any hit on his head if he ditches his comrade in crime. He refuses and the two make off with the money because it’s no longer about safety; everything is about money.

The film goes well out of its way in showcasing how the corrupted world of the mafia is no different from that of the American government’s handling of the banking crisis. Consider how Frankie and Russel are not pursued by a justice-seeking detective but another assassin who is only in it for the money. That assassin is Jackie Cogan, played with a calm coolness by Brad Pitt. He’s thoughtful enough to leave money for a tip and seek out his targets effectively, but he also knows when to betray others when it benefits him most. He works for the likes of scummy people like Mickey (James Gandolfini), an aged gangster who drowns himself in booze and hookers, not the least bit frightened about going to jail for any crime he is involved with. Mickey has done time before and isn’t too frazzled to do it again. Something within the system isn’t working if Mickey feels comfy enough in these aspects.

But the film is more or less about Jackie and how he goes about his business. He cuts through a lot of the under the table talk to make sure everything is as blunt as the movie’s message. When a nervous driver (Richard Jenkins) informs Jackie he wants the two criminals taken care, Jackie corrects him by stating that he indeed wants them dead. He doesn’t shy away from admitting the truth, even in the film’s most blunt closing scene where during Obama’s election speech, Jackie once more corrects the language, that America is more of corporation similar to his own; “Now f**king pay me.”

Killing Me Softly is the type of gangster picture I wish I could love more. It’s fairly slick in its staging and does feature some stellar assassinations played out in slow-motion and shaky-cam techniques. But it still relies on a few too familiar tropes of juxtaposed music choices and hammers its message home so forcefully it’s certainly going to give a few viewers a concussion. It’s a decent crime picture if you’re willing to let its meandering style hold your hand through trying to explain the corruption always looming in the background.