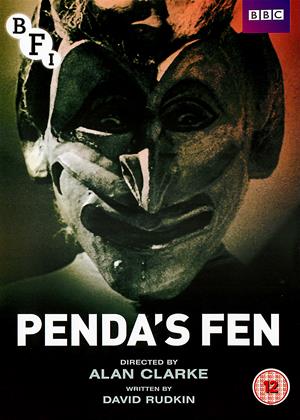 The Flames of Heaven - Penda's Fen review by CH

Pagan. The word derives from the Latin for country. That is, those of such a disposition hail from unsophisticated parts, even villages. So we are reminded by John Atkinson who, looking like a cross between Derek Nimmo and Jeremy Irons, plays a rector in a pleasant house in the Malvern Hills. This etymological point is not part of the sermons which he types on what, even in 1974, was an antique machine, but an observation made while walking across a nearby field with his son, Spencer Banks, who is about to turn eighteen.

Banks is an unusual schoolboy, immersed in Elgar, in particular to spiritual voyage he created from Newman's The Dream of Gerontius. Banks has politics of a country-loving Tory hue, at odds with his time and fellow pupils who, dressed at times in Army uniform, are much given to ragging him (there are moments when one thinks of If...).

Penda's Fen was written by David Rudkin, and to his surprise Alan Clarke agreed to direct it. Clarke was known for gritty films of social realism. Although billed, in some quarters, as a work of horror, it is not exactly that. Rudkin has said that the idea came to him from a road sign in the area which pointed to a village. Its name haunted him, and he looked into its origins: it derives from Penda's Fen, name in honour of a King.

Banks himself is on a quest, a direction in life which, for all its ease and good fortune, is troubled. This will involve him in many strange encounters as angels descend and strange rituals are enacted as reality and dream merge to create a new dimension to existence.

Rudkin has recalled that, at times, Clarke was not sure what was happening. He told him simply to follow the script that it was all in there, it was the only book he need to read about all the myths and psychology – and the life of Elgar – which he had drawn upon in writing it.

And so here it is, a mélange – with many a descending Sun – which carries us along, the dialogue taken at a slightly slower than natural pace, as if all concerned are out of synchronisation with the world around them.

What's more, one learns that part of Gerontius was inspired by one of Elgar's dogs.

There is nothing quite like Penda's Fen, too little known since its first showing in the BBC's Play for Today series.