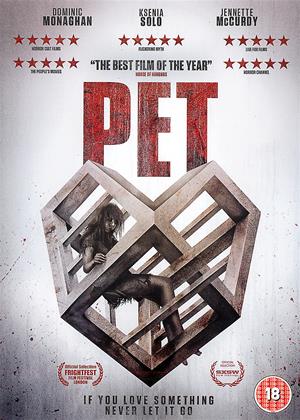 Very Entertaining and Twisted Kidnap story. Who has Kidnapped Who? What on Earth will Happen Next ? How will This End ?

Ok , so Not the Most Amazing Thriller / Horror out there but well worth seeing more than the once .and I think Very Unusual .

It has everything the Usual Kidnap Story has, a Sad and Lonely Looser , a Pretty Girl ,a Great Hiding Place ....BUT ...That's where Comparison ends ... Change Gear,Redirection....... Go!

The love present in Pet is not give and take, but take and slaughter. There is so no one to sympathize with in this horror thriller which portrays the world as a cruel place where everyone is either a weirdo psychopath, a mentally disturbed killer or an uncaring stranger that is one off-color comment away from punching you to the floor. This is a film that has the audacity for an anti-social man to place a woman in a cage and then spend the whole movie trying to rationalize his decision or at least make the woman seem just as horrible. It’s an equal opportunity piece of cinematic trash where every gender is despicable.

Seth is a shy security guard of an Animal Control department that doesn’t know a thing about women. He finds himself infatuated with the lovely waitress Holly, but can’t find a way to gain her attention without seeming creepy. Unsure of how to proceed, he asks his co-workers about what he should do. Turns out they are the wrong people to talk to as their advice is to approach her. What his co-workers don’t realize is that Seth has already spoken to Holly unsuccessfully once. When he follows her to the diner she works at and badgers her to remember him, he’s officially the creepy stalker guy. It only gets creepier from there as he sends her flowers at work and steals her journal to read all about her. Is it any surprise that he will eventually kidnap this woman and trap her inside a cage? I guess it’s a little surprising that he’d chose to lock her up in the basement of the Animal Control society. You should never mix business and pleasure in the same building.

As if to prevent the movie from becoming too boring and depraved - and, boy, does it get depraved - a handful of ridiculous twists are thrown into the mix. Seth apparently isn’t just some nut, but some sort of psychopathic vigilante trying to out Holly as a murderer. Uh huh. But, wait, not just a murderer, but an unhinged murderer driven by jealousy and haunted by ghosts. Realizing she’s just as crazy as Seth, Holly begins a series of mind games where she threatens to kill herself, starve herself and even manages to convince Seth to kill others.

I suppose this is meant to be more comedic, either intentionally or unintentionally, but it’s hard to see the humor amid all the muck of such putrid picture. It belongs in a thriller category among the likes of I Know Who Killed Me and Mr. Brooks, gunning for more ludicrous twists than presenting any characters to care about it. I didn’t care if Seth won the heart of the girl or if Holly was able to escape and kill again. I guess I liked Seth’s co-worker Nate only because he was so disinterested in Seth and seemed as though he’d rather be in another movie. It’s such a shame that he must die by the most mundane of horror movie logic.

The movie does its best to try to cover up its sloppy and mediocre writing with plenty of shocking twists and gross gore, hoping you’ll be come so enraptured by the rollercoaster you won’t notice the faulty spokes. Heads are smashed with cinderblocks, bodies are chopped up, throats are slit and a dog is put down without much sadness. There’s no time for love, sadness or empathy in this butt-ugly ballet of diversions and bland dialogue. One of the first things Seth says to Holly after kidnapping her is that he’s not a psychopath and that she just doesn’t understand. I understood most of this unfocused horror, but the real question is if I care. I don’t and neither does Holly or anyone else. The world seems so cruel to poor Seth, a quiet little man who just wanted to cage a woman into being his lover. What a thought-provoking tale of depravity, where my thoughts were “who wrote this garbage?” and “what should I watch later?”