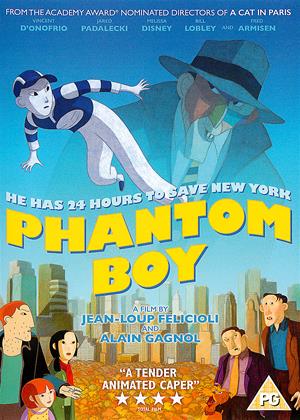 Straight from the creative minds of the people behind ‘A Cat in Paris’ comes Phantom Boy, a surreal but grounded in reality New York story that tells the tale of a very special boy. Granted, Phantom Boy turns New York into a French-speaking province, but this is reasonable since it’s a French production and, well, making it otherwise would lose that special, almost magical touch. Something worth noting is that I’m not particularly fond of this style of animation, but Phantom Boy delivers its visuals in a very convincing way that you almost start to believe that the events in the film are actually unraveling before you very own eyes. Now onto about why the film is good.

The animation follows a young boy who goes by the name of Leo. Leo is an upbeat and an all-around positive boy, but he soon gets hospitalized because of a serious illness. However, Leo also finds out that he is the progenitor of some very special powers, powers which grant him the ability to do an astral projection in an invisible body frame. The boy is trying to help an honest cop to catch a criminal who is disturbing the peace of the community. Which leads to one of the most creative points of the film – the focal point of the main villain, which is none other than his dog.

The rest of the film plays away in an already-seen fashion, with our heroes on one, and the villains on the other side of the law. There are really no surprises here, but when you consider the artistic nature of the film, you quickly realize that Phantom Boy is a visual contest first and foremost – and only then it has a story to tell. In this regard, the film’s main story IS the visuals, and if you don’t like want the plethora of different colors and the quirky background – you’ll probably look elsewhere for fun.

Concurrently, Phantom Boy is a family-friendly film, as it’s meant to ponder to a wider audience than, say, ‘A Cat in Paris’. At times, this becomes obvious and it really detracts from what could’ve been a masterpiece; but then again, that’s fishing for straw-man arguments, as there isn’t really a point of scolding the film for what it could’ve been – rather than criticizing it for what it is.

When you put all the pieces together, despite being a film for the whole family, Phantom Boy will probably escape the radar of most western audiences, but I am positive that Jean-Loup Felicioli and Alain Gagnol’s piece will find its place under the sun – probably as a cult animated feature that no one saw.

So, don’t be that person and go see this film.