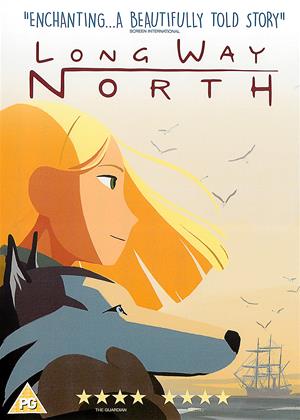 Synopsis:
When her explorer grandfather mysteriously goes missing on his latest expedition, Sasha - a 15-year-old aristocrat in 1800s Russia - leaves behind her strict parents and the ballrooms of St Petersburg to embark on an epic adventure to find him. Tracking the course of his ship to the Arctic shores, Sasha joins a crew of sailors headed towards the dangerous climes of the North Pole. However, just like so many explorers before them, Sasha and her crewmates soon find that their search may prove to be more hazardous than they once thought as the ice closes in.
Directors:
Rémi Chayé
Producers:
Ron Dyens, Claus Toksvig Kjaer, Henri Magalon
Voiced By:
Christa Théret, Féodor Atkine, Antony Hickling, Loïc Houdré, Chloe Dunn, Thomas Sagols, Audrey Sablé, Rémi Caillebot
Writers:
Claire Paoletti, Patricia Valeix, Fabrice de Costil
Aka:
Tout en haut du monde
Studio:
Soda Pictures
Genres:
Children & Family

Yes, yes, it looks pretty and artistic, but what else? These were my reactions to the stylish and divergent animations of The Secret of Kells and Song of the Sea; animated films that had a style usually seen in shorts, but blown up for a feature film. And while these films were a joy to look at, their meandering plots on the fantasy and magic left me hungry for something with more meat on these artistic bones. Long Way North appeared as though it would be yet another one of these animated films that spends more time basking in its own illustrations than pushing it through a story. Thankfully, the movie narrowly avoids this easy pitfall by staging a real story, worthy of its beautiful style.

Set in the 19th century, the plucky Russian aristocrat Sasha is too curious about what happened to her grandfather on his Arctic expedition that he never returned from. Everyone seems to have called off the search and have deemed him to be lost at sea, but Sasha demands closure. And with a strict family that would rather she marry and shut her mouth about her own politics, it seems to be an ample time to ditch her home and head for the snowy hills. Though Sasha is a clever enough girl, she’s still an aristocrat and not exactly adventure material. As such, her mission begins with a rocky start. She sells off her earrings for passage on a boat for the expedition, only to be swindled as the boat leaves the port. With no money, she ends up working at a tavern to raise funds for her journey. If she wants to seek her grandfather, she’s not only going to have to be brave, but willing to work.

And work she does as she soon develops a quick wit and can-do attitude. By the time the swindler comes back to the port, she’s wise enough to have enough money and bargaining skills to get on with her adventure. She’ll need all the smarts she has as the adventure is anything but fun. Ice threatens to destroy the ship as they plunge through cold waters. Food reserves run low and the crew soon become bitter and hostile towards one another. Mutiny becomes a very real possibility as everyone on the boat begins to despise Sasha for leading them on a hopeless mission through a snowy hill. Not exactly a Disney animated film if it wasn’t already obvious.

As with any well-designed animated film, Long Way North begins with a unique style, but is so bold with little details to sell its real-world setting. The scene where the men huddle in the snow, shivering slightly as they slurp the few remaining drops of soup rings truer here than it would in live-action. Animation has the power to not only create another world, but place us within its setting. With the most simple of lines and colors, the animation is able to display the feeling of freezing to death and the nihilism of a near-impossible mission. The third act turns into such a nail-biter of a gritty survival picture that I forgot this was animation, finding myself gripped to see if Sasha or anyone would make it through this mission alive.

It may seem insulting to the animators that I took such great value in the story and write of the animation more as sound design where it’s really only great when it’s not distracting. I mean no disrespect whatsoever. I applaud the animators for constructing a world that is as dimensional and believable as it is colorful and painterly. There may never be a moment where the technicalities are given a moment to feature a money-shot perfect for an artbook, but maybe it doesn’t need one. There’s such a focus to this movie that it warrants repeat viewings where one can take note more of the story or the animation.

I’ve often preached about how animation can be a medium that can explore any story, any character and any time period. Long Way North proves all three with a script and tone not usually suited for the medium. Credit director Rémi Chayé for keeping this picture as on point and determined as its lead hero, refusing to stop and smell its own roses of a well-drawn world. The picture has naturally become a darling of the festival circuit, but I seriously hope it can become more of a breakout picture for portraying an adventure that feels real and ripe with character.