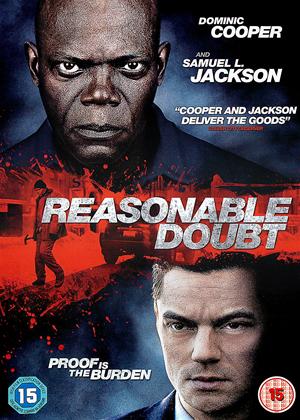 Samuel Jackson's character is a delicate blend of victim and detached brutality. He plays it better than anyone else could. It is a pity that a lot of the plot rests on points of law that exist in America but not the UK. The main theme however is if this happened to you what would you have done? It is a soul searcher, and a pretty grim one at that.

As countless parents have told their children over the years, it’s not about whether you win or lose, or about the final outcome, it’s about whether you’ve tried; and obviously the writer and director Peter P. Croudins and Peter A. Dowling have taken this advice to literally and turned what could have been an interesting, albeit a little generic, thriller into a mish-mash of crime drama stories more suitable for television than the big screen. These two boys have tried too hard, experimented too much and left us, the audience, with a truly disappointing outcome.

Starring Dominic Cooper and Samuel L Jackson as Mitch, the successful although a little arrogant district attorney and Clinton a working class but honourable worker, the film begins as a introspective thriller in which Mitch (Cooper), is involved in a hit and run accident which Clinton (Jackson) is held accountable for.

Celebrating yet another success with his colleagues Mitch makes the decision to drive home after having a bit too much tequila, convinced a cop car is following him Mitch finds himself distracted enough to run over a pedestrian. Leaving the guy for dead – but convincing himself he’s done enough by calling 911 – Mitch goes home. The next day however he discovers that, after finding the man in the street, Clinton has been picked up covered in the victim’s blood and the near dead body in his van. Claiming he was only trying to help the man and get him to a hospital Mitch – and the audience – alone know the truth; but when Clinton’s case comes to trial Mitch is faced with a difficult decision.

All good so far? Yep? I was happy to up to this point, I knew where I stood, I could see pretty much where this was going, Clinton represents to Mitch the working class background he has sought to leave behind him, he’s not faced with a combination of karma and morals, will he use his legal prowess to get Clinton off the hook? Will he step up to the plate and admit his crime?

None of these things happen, at least not straight away, what happens instead is a bizarre plot twist – perhaps twist is an inaccurate phrase, addition might be more suitable – in which a serial killer seeking revenge is thrown into the mix and Mitch’s inner struggle is replaced with a poor attempt at a murder mystery style crime narrative.

Couple this with the heavy handed camera work and directing (expect a lot of intense, lingering and unnecessary close-ups) and some bad scripting and the talents of the two incredibly respectable actors, Jackson and Cooper, go entirely to waste.