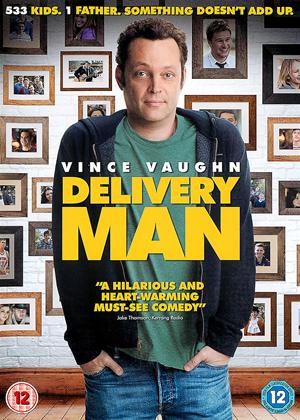 This movie is so-so. An old idea about a man whose sperm donations means he has hundreds of kids (I have heard a radio play on the same issue, read Roald Dahl's only adult novel UNCLE OSWALD about this issue too).

Loads of plot holes in this - legal loopholes. And ultimately I do not believe the story.

But the characters are well-drawn and it's watchable.

Interesting too that the UK now has a law that gives kids conceived by sperm donation the right to try and contact their real biological fathers. OMG! So insane it could lead to this OR a tragic outcome.

It’s hard to start a Vince Vaughn film because there is a stigma attached to his name as he has jumped from one bad title to another, showing little to no improvement or promise of change. Films like The Dilemma and The Internship have shoehorned Vaughn into a place where he is known only for poor comedy vehicles and while Delivery Man misses the mark it does show the Vaughn people are missing, the one capable of a detailed performance, even if the material and end product is not up to snuff.

Delivery Man follows David Wosniak (Vaughn), a unreliable mess of a man who is constantly letting his family and friends down. When he discovers that due to an excessive attendance at a fertility clinic 20 years ago he has fathered 533 children it starts a chain reaction that may change his life.

While Delivery Man tries to be a touching comedy it rarely makes you laugh and while that's not necessarily a bad thing it doesn’t hit the right emotional beats to make it work as a drama either. Not only does the film make light of drug addiction it also makes David do horrible things for the sake of protecting his identity. It’s alright keeping a secret but using a disabled teenager to do it will induce more than enough retching.

The film comprises itself of small vignettes of David visiting select children, the ones with perfect hair and skin as if he was crafting some kind of film. While these sections do have their moments (Britt Robertson makes a likable screw up), they feel forced and unoriginal, as if someone else on Earth has had 533 children and did the exact same thing. The films unique story is co opted by cliched sentiment.

However the film features Vaughn’s best work since Into The Wild as he elevates the subpar material he is given to make David not only a lovable mess but a terrific character to watch grow, even if the characters around him are paper thin motifs of how directors assume life should be