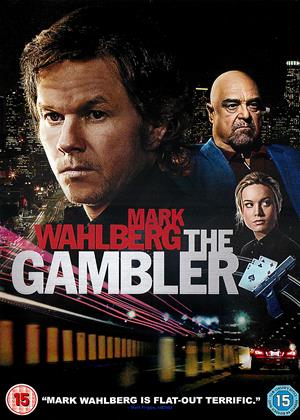 Reviews (2) of The Gambler

See Steve Mc Queen in Cincinnati Kid to see what this was obviouly a copy of. I know the old films are slow....like The Outfit, and Charley Varrick, but they were the biz. No special sound or effects and show the way. Villain and then Get Carter then Long Good Friday.....set the mould.

This is not bad. Goodman bears all, which is quite a lot....... Strange how so many actors are just a head....look at Richard Burton, Michael Caine, and Marlon brando.........Alan Bennett was well on the case when did his famous Talking Heads cameos, and David Byrne named his band thus.

I enjoyed this gambling thriller , good story and well acted, kept me watching all through. You can take gambling too far and get in with the wrong people.

Not long after I saw Jason Statham provide a perspective on the compulsive gambler in Wild Card, Mark Wahlberg takes a whack at the character type in the simple titled The Gambler. It’s a refreshing break in which Wahlberg is given something simpler to work with in a story that doesn’t feature him running and gunning or hooping and hollering. He is a cool and calm character in this picture bound by addiction. Perhaps too calm to the point where he blends in with the woodwork. I wanted to see what Wahlberg could do in something far different from his usual affair, but he doesn’t seem to want to put that extra bit of effort into this script. He’s entirely relying on this script to move him in this picture.

And that’s the crucial mistake of The Gambler. Here you have some fantastic actors involved including Brie Larson, Jessica Lange, John Goodman and Michael K. Williams. None of them have a memorable moment and just sort of exist as simple pawns around Wahlberg’s character of Jim Bennett. Even Wahlberg himself seems to exist around the character fulfilling everything he needs to do, but never anything that makes him that character. Jim is supposed to be a deeply flawed individual who can’t stop gambling and is on the verge of having his life destroyed by violent debt collectors. His life is a rollercoaster that he fears he cannot stop. That’s the sense audiences received when James Caan played the role of Jim in the 1974 original.

None of that intensity is present here. The 2014 update seems to favor his risk-taking rather than display the nerve-wracking destruction of its effects. Jim’s gambling scenes are overlayed with classic rock and sped up in fast motion to make his money-losing seem thrilling. It’s an effective method, but an artificial one. The real thrill is lost in how Bennett seems to make speedy recoveries to get back at the table. The film opens with him losing a ton of money. He seeks a loan from some sharks and loses it at the table. His mother gives him some money to pay off his debt and he gambles that away as well. The cycle continues on and on until eventually Jim makes enough and clears his debts. Rather than wallow in the dark flaws of the compulsive gambler, the film makes Jim out to be a sort of unstoppable force who battles his way through every debt until he is free.

This is rather surprising in that the way Wahlberg’s character is staged seems like more of an action star than Jason Statham in Wild Card, a film which did a far better job getting into the head of a gambler. There’s a similar element to the two films of the F everybody principles. Both are working towards that ideal of being able to have enough control of their lives to tell others to piss off. In Wild Card, Statham realizes the error of such a goal the way he blows his streak after making enough money because gambling more could lead to F-you money. He loses it all from his stupid mistake. John Goodman, a bald mobster, relays a similar concept to Wahlberg, but it ends up being more about keeping your head above water than achieving fortune. Is that what we’re supposed to be so enthralled with Jim about? The way he manages to just barely clear his debts? At least in Wild Card there was an admirable goal of leaving Vegas for a paradise.

There are some hints of Wahlberg displaying some better acting prowess during his day job as a college English teacher. He rants and raves about how pointless and unfulfilling his role is as an educator. Jim desperately wants to find some passion in his limited audience that seems more interested in their smartphones than his lectures. Interestingly enough, Wahlberg seems more alive in these classroom scenes and also a bigger threat than anyone else who “threatens” him for money. These scenes could have made the movie, but they’re far too short and don’t bare too much fruit even though its the only waking moments of the film.

For a film about the dangerous risks of gambling and loan sharks, The Gambler is severely lacking in consequences. We keep hearing throughout the picture how Wahlberg needs to get the money “or else.” Else never happens or even comes with a warning shot. Part of what makes this compulsive nature so intense is the threat of poverty and violence. When none of those seem to rear their ugly heads, gambling appears more glamorized than what I originally thought was intended. I feel as though a big opportunity was missed here as Wahlberg seems to specialize in overreacting with fury. Yet he appears much too at ease for owing hundreds of thousands of dollars he loses at the tables. Is it too much to ask for a film with gritty loan sharks to cut off a toe or smash a kneecap? This is one film in that genre that could use that brutality since it sure doesn’t do the job of a simple drama.