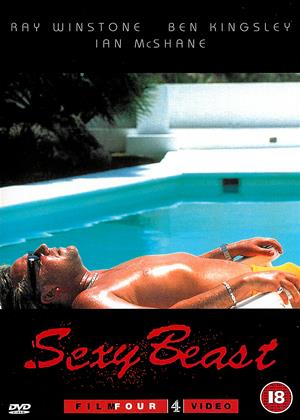 Gel (Winston's) is a retired criminal living in Spain, not tempted to return to villiany for anything. Enter psychopathic Ben Kingsley, to tryand change his mind for a job back in England ( do the job, do it, do it, yes yes yes yes yes). All the cast are great but Kingsley is something else. A must see for gangster lovers.

I saw this film when it first came out, and it certainly hasn't aged that much in nearly twenty years. It's just as amusing, brilliantly acted, and the directing is top rate. Of course Ben Kingsley steals the show, and Ray Winstone is in superb form - in fact everyone in the cast is great. Ian McShane looks and acts as though he ought to have been in The Godfather. I'm surprised that Jonathan Glazer has surprisingly made only two (very good) films since.

Perfection in every way and one of the best films ever made. If I could give it 10 stars, I would - Sexy Beast review by TB

This film is and will always be one of my top 10 of all time. Not one element isn't perfect. The performances are phenomenal. The locations beautiful. The script a work of genius. The direction inspired. The soundtrack flawless. When people talk about films transporting them to a different world, this is what they mean.

Whilst the premise sounds like a standard clichéd film, (retired gangster living in Spain is called upon by an old foe for one last job,) this is simply a vague outline of the plot. This is a movie where the beautiful and tranquil life that the main character has built for himself is suddenly and brutally torn apart.

Gal (Winstone) is a retired safe cracker who has left the London gangster scene, where he was a minor celebrity, and moved to Spain, leaving behind the life that landed him in prison and in the end threatened to destroy him. He is married to DeeDee (Redman,) an ex porn star, and the love they have is the central bedrock of the film. You totally believe the deep and passionate connection they have, which makes the later events that much more powerful. They are joined by life-long friends Jackie and Aitch (White & Kendall) in this idyllic life, which is then shattered…

Don Logan (Kingsley,) from the moment he appears on screen, dominates everything. A monster in human form. A man who, in Kingsley’s own words, is “The unhappiest man in the world.” And whilst that may seem like a vague and somewhat tame description, in many ways it gets to the heart of Logan as a man. The resentment and jealousy boil out of him, as he looks at the perfect world that Gal has created, knowing that he will never have anything close to this because no-one would ever want to be with him.

And this knowledge of how people feel about him is both his power and his weakness. His ability to be able to make the people around him do what he wants is only matched by the self-hatred and miserableness of knowing those same people despise him and look forward to the day they never have to see him again. And when that is coupled with Logan’s desperation to be accepted, it combines into a melting pot of violence and anger.

The other genius of casting Sir Ben Kingsley, which this film exploits perfectly, is how to most people he was always seen as Gandhi, the polar opposite of Logan. And this was even in the mind of Ray Winstone, who in a subsequent interview remarked, “Nothing against Ben Kingsley, but I couldn’t see myself being beaten up by Gandhi!” But within 5 minutes Kingsley on screen as Logan, this previous image is totally erased.

The subsequent story and battle of wills between both Winstone and Kingsley but also the other characters, and the culmination of this in the underwater bank robbery, is perfection. In particular, the confrontation in the kitchen, as the tension reaches unbearable levels, is a masterclass in minimal staging producing maximum impact. And this was shot in one take…

To summarise, this film is a masterpiece, and I don’t use that word lightly. Over the space of 90 minutes, you are entertained, horrified, scared, disturbed and laugh out loud. In short, everything that great cinema should be, especially if you like the most creative swearing ever put on film…

This is a superb film - utterly stylish and stylised, as is usual from former pop promo director Jonathan Glazer (who recently directly the deeply disturbing Under the Skin).

The cast is superb - with Winstone capturing exactly the attitude of the white working class who have escaped the multiculturalist mess of grey grime+crime-ridden East London and a government and pc culture which despises them for their race, their class, their culture, to instead live in the sunny climes of southern Spain. OK< so this character is a criminal and not just a white working class refugee from 'vibrant and diverse' London, but his half a million plus Brit neighbours are the same as him in their culture and attitudes.

Congratulations to the film-makers for putting the white working class on screen - because it seems these days you can see any and every culture on TV and film, any ethnicity and diverse culture celebrated - except for the nasty white working class culture of the Cockney Eat End (always condemned as 'racist' by ignorant bigot 'liberals' seemingly unaware of the irony puddle they're sanctimoniously splashing in!)

Ever since Villain, then Get Carter, we love a good actor doing the hard case London thing. As someone who bought car parts from Richardsons in South London for his MG ZA Magnette, oblivious of the fact it was a front for flashing mains cables about the persons/parts of Kray-connected, I feel well at home Rodney.

Ray just became type caste later, but still has the cred here, and Ben is just the Man.........must be before In Bruges? Similar vibe.

Surprised by positive reviews above, and 86% rating. Maybe they are young?

Was hoping it would be as good as Mad Dogs, or as funny as Bruges - which is brilliant.

I rarely think a watching a film is a waste of time, but this one is poor.

Nice to Amanda Redman in this role.

And the young Spainish boy did well.

As for Ray and Ian, they have had much better material to work with.

Not impressed by Glazer.

Anyway, the film itself is as good as everyone says, and gets better with repeated viewings over the years. One of my top ten.