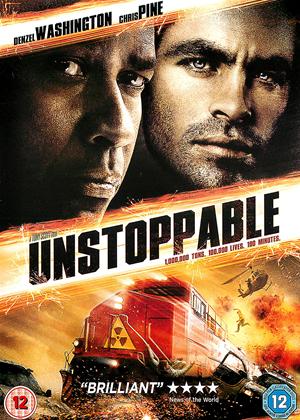 The obvious plot is unstoppable - Unstoppable review by JD

A pretty simple plot with a very guessable ending. Lots of smiles and backslapping. There are a few moderately amusing moments and Danzel is as usual interesting but the special effects are really the only good bit about the film.

If you want to describe director Tony Scott’s movie ‘Unstoppable’ as ‘Speed’ on a train, that’s quite acceptable. But there’s no mad villain behind this one – the runaway train IS the villain! And it’s up to Denzel Washington and Chris Pine to put a stop to the freight train on its tracks before it careens into unsuspecting residents and mightily explodes.

‘Unstoppable’ is based on true events in 2001 when a train carrying toxic chemicals sped on the tracks through Ohio without an engineer on board; its rail rampage went on for hours before it was halted. The train in the movie is ‘a missile the size of the Chrysler Building’ in New York City, and it’s up to a slew of dedicated individuals to diffuse the situation. Veteran engineer on his way out Frank (Denzel Washington) must work with rookie conductor Will (Chris Pine) even when they can’t see eye to eye because of their age gap and totally different conflict resolution styles. With the help of traffic manager Connie and her boss, they try a multitude of strategies to slow the train down and avert disaster.

This is the second movie of Tony Scott that stars a train. In 2009, he directed ‘The Taking of Pelham 1 2 3’ but it came up short in the action-thriller department. In ‘Unstoppable’, he raises the ante and you get a sense of teamwork from its cast, production design, original score, and special effects. The chemistry between the battling Denzel Washington and Chris Pine is evident and engaging.

The fast-paced quality to the film is hyper-visualized and the blips and colors are abrupt yet fascinating. Of course, like any Tony Scott movie, its dialogue borders on formulaic, even the issues its leads Frank and Will are quite forced. We get it, people have issues but juxtaposing it with an action-thriller only muddles the view. There’s no time to sit around and talk about it – there’s a speeding train on the loose! ‘Unstoppable’ is an almost-good popcorn movie that leaves you on the edge of your movie seat.