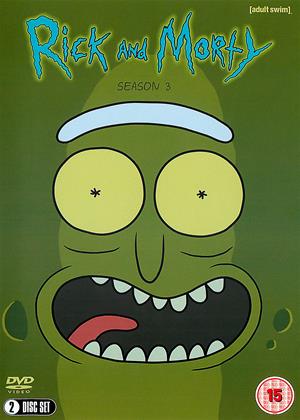 Reviews of Rick and Morty: Series 3

Season 3 of Rick and Morty is perhaps the most troubling of seasons for how it almost grasps the morality of the character. A major problem throughout the previous two seasons is that Rick, the alcoholic, and mean-spirited mad scientist, is always posed as someone who is always right with none of his actions fully called into question. There are maybe one or two episodes when Rick’s nature is shown to be wrong-headed but then quickly bounces back. This season kinda-sorta tries to address this issue.

First, there’s a fakeout. Rick had allowed himself to be captured at the end of season 2. In the season 3 opener, aliens dig into his mind to find the source of his pain and anger. From what he experiences, it seems that he once had a wife and child that were taken from him. This could have the potential to maybe find more to Rick than the mere excuses for his actions. This prospect is sadly dashed when Rick somewhat stages these memories as a diversion so that he can make an escape. Sorry, did I write an escape? I meant murder an entire civilization for no reason either than petty revenge. Some ridiculous rambling about special McDonald’s Szechuan sauce and Rick has fully established the status quo once more.

This sets a sour tone for the season and I don’t just mean the real-life overreaction of fans when McDonald’s reissued the Szechuan sauce Rick craved and then ran out (though this didn’t help the show’s appeal). No, it’s that this season quickly settles back into its edgy nature of always making Rick right and always making Morty wrong. Rick goes on more adventures with Morty, they encounter more alien beings, and Rick occasionally kills everyone or says something awful.

The one major exception to this is the Pickle Rick episode. No, it’s not because Pickle Rick became a meme, slapping Rick’s face on a pickle. It’s because there’s a psychiatry plot in this picture that actually digs into Rick’s bigger problems. Can you tell this was the first season where they actually hired female writers? Yet this episode is just as frustrating as the debut episode because, again, more fans remember the Pickle Meme than the deeper dive into Rick himself. Fans continue to latch onto the wrong elements of this show and dare not entertain the morality behind the intelligence.

I say this all because Rick & Morty does still have some fun aspects to it. The various designs, the existentialism contemplation, the cynical approach to reality, and the bombastic nature all have their moments of hilarity here and there. There’s one episode, in particular, this season that is so hilarious for being self-aware of its accumulated characters. But for every one episode like that, there are at least three others that venture down tired paths of atheism babble, justifiable meanness, and aloofness to whatever satire of Rick may be present.

The show still has promise. It has a unique style and some great worldbuilding to be sure. But if the show hopes to continue on and not stagnate between seasons, it’s gonna need a whole lot more than Pickle Rick and Szechuan sauce to keep it afloat.