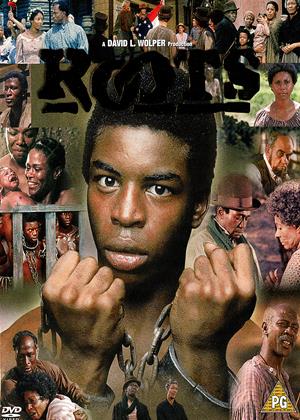 Synopsis:
Please note this film is on a double sided disc, and both sides need to be played in order to see the entire feature.

His name was Kunta Knite. Kidnapped from Africa and enslaved in America in 1767, he refused to accept his slave name of Toby. Heirs kept his heroic defiance alive, whispering the name of Kunta Knite from one generation to the next until it reached a young boy growing up in Tennessee. His name was Alex Haley. And he proclaimed Kunta Knite's name to the world. Through the lineage of one family, Haley and his Pulitzer prize-winning Roots told a story for all America and the world. Seen by 130-million viewers during its initial U.S telecasts and the winner of dozens of awards, the David L.Wolper production remains a vital and engrossing entertainment landmark a quarter-century later. Digitally remastered for optimal video and audio presentation from the original elements, Roots will prove to be an unforgettable DVD journey.
Actors:
Cicely Tyson, O.J. Simpson, Lloyd Bridges, Scatman Crothers, Levar Burton, Yaphet Kotto, Lorne Greene, Edward Asner, Richard Roundtree, Ian McShane, Moses Gunn, Brion James, Louis Gossett Jr., Burl Ives, John Amos, Doug McClure
Directors:
David Greene, Marvin J. Chomsky, John Erman, Gilbert Moses
Studio:
Warner
Genres:
TV Classics, TV Dramas

Reviews (2) of Roots: The Original Series

Better that 12 years a Slave - despite being a bit dated with creaky dialogue + acting - Roots: The Original Series review by PV

I watched this now for the first time since the original broadcast. I find I remembered a couple of scenes, which, when one thinks I saw this in maybe 1978 aged 10, shows how powerful this drama is and how it sticks in the memory. I can hardly remember anything of the Hollywood movies I watched last week!

OK, so it is a bit dated. That slow 1970s zoom is everywhere, and by modern standards it is slow-moving (though I like that; I despise the quick cut noisy running around goggle-eyed Dr-Who-style way of upping the drama). The acting and dialogue is a bit dated and wooden at times BUT the characters are well-developed as is the story and context. I suspect a similar drama made today would feel it had to hammer homes the race politics points; happily, Roots focuses on telling a story, as all drama should. Historians will never GET drama or fiction, of course, and so constantly snipe at historical inaccuracies - forgetting, if they ever remembered the fact, that writers have no responsibility at all expect to tell a good story.

The history is inaccurate of course; in reality whites rarely hunted blacks - slavery was thriving for centuries in Africa before the white man even visited in any mercenary way, and the Arabs were there slaving well before Europeans (that is why Kunta Kinte s Muslim - because his ancestors were enslaved within Africa by marauding Arabs - and that is why north Africa is Muslim now too; people had a choice - convert to Islam of die...)

Having said all that, this is a FAR better drama than the worthy and emotive sob story 12 Years a Slave, which I found tedious and manipulative, having more to do with modern race politics in the USA than anything else. That movie Armistad was also a bore.

One of the best drama series ever made. - Roots: The Original Series review by CP Customer

By today's standard of TV drama 'Roots' is fairly unsophisticated, it pays little attention to historical accuracy, the quality of acting is average and the dialogue is pretty clichéd, but despite its shortcomings it's the sheer power of the story that shines through which makes it one of the most enthralling, poignant and compelling pieces of drama you'll ever see, and something everyone should at least watch once in their lives. One major disappointment is that compared to the VHS release this DVD edition is missing 'The Gift', a one off feature length episode made after the original series which tied up some of the loose ends between episode 2 and 3 of the original series, which bizarrely has been replaced by 'Revisiting Roots', 20 minutes of rather dull sound bites from some of the lead cast members, directors and producers. Despite the missing episode, 'Roots' is quite simply unmissable and fully worthy of a perfect 10.