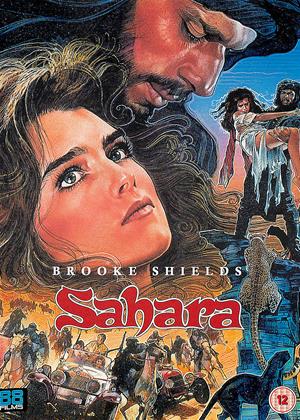 Don't be fooled by the synopsis on the previous page, obviously quoted from back of the DVD box. Brooke Shields disguising herself as a man to take part in a men-only car race? That sounds hilarious, but having turned Brooke into a "man" only marginally more convincing than Barbara Windsor in "Carry On Jack", the scriptwriters somehow can't think of anything funny or interesting to do with the concept, and it's very quickly dropped never to be mentioned again. That's the problem with the entire film. "With more peddle (sic) to the metal, edge of the seat madness than anyone could possibly ask for", it says here. Which, alas, is no truer than the claim that this tedious box-office bomb, hated by critics and audiences alike, is a "classic".

It initially looks as though this movie is going to be a live-action "Wacky Races" with Penelope Pitstop in male drag versus a German Dick Dastardly in a weaponised Mercedes. No such luck! For three-quarters of the runtime, the race is almost completely forgotten about. Instead we're treaded to a sort of low-budget quasi-feminist remake of "Lawrence Of Arabia" mashed up with that once-notorious Rudolf Valentino silent "The Sheik", in which villainous Arabs inflict predictable indignities upon our plucky proto-ladette, mostly involving attempted rape, though sometimes for a change she gets flogged, shot at with machine-guns, or thrown to the leopards (spoiler: sadly they don't eat her).

As the nice Arab who looks a lot less Arabic than the nasty ones and is therefore an acceptable love-interest for Brooke, D-list hunk Lambert Wilson occupies space and that's about it. His subsequent career highlights included another film called "Sahara" which lost even more money than this one, and "Catwoman". Brooke Shields wasn't exactly A-list herself by 1983, already on the way down from her brief moment at the top because as soon as she started keeping her clothes on, audiences noticed that she couldn't act. By the way, this is supposed to be a stirring adventure for the whole family, so Brooke keeps her clothes on, thus defeating the object of her being in it. Rounding out this stellar cast is Horst Buchholz, who presumably had a far bigger part in the first draft of the script, but ended up being sidelined along with everything else to do with that race the film was supposed to be all about but couldn't afford to show us. Remember that young man who overacted so atrociously in the original version of "The Magnificent Seven"? That was Horst Buchholz, and he ended up playing bad guys in films like this. Somehow I'm not surprised.

Packed from start to finish with one-dimensional stereotypes and predictable clichés, starring an actress who can't act, and with a gaping hole where its entire reason to exist was supposed to be, as an action film it's as lacklustre as Ennio Morricone's mostly forgettable and occasionally horrible score, as a romance it's woefully unromantic, and as a screwball car-race comedy it's quite good for five minutes at the end, which only reminds you of what the previous 100 minutes failed to deliver. And because it can't make up its mind whether it's a comedy or a thriller, it ends up being neither. It doesn't even know how to make effective use of the Sahara Desert! The previous page claims this film has a "cult audience", but I honestly can't imagine that being true. Unless they mean there's a support group people who like it can attend until they get better?