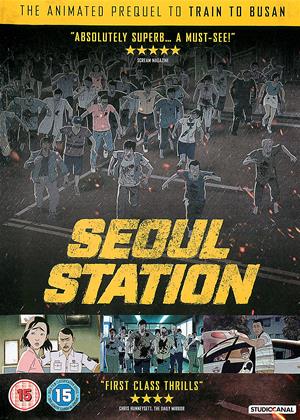 Synopsis:
As the sun sets around Seoul Station, an old man thought to have died sinks his teeth into the warm flesh of a homeless person. Soon, the streets are filled with vicious zombies desperate to feed. Hae-sun, a runaway, witnesses the frightening sight while her father and boyfriend desperately search for her. As the attacked become the attackers, the government declares a lock out of the station, leaving the uninfected to struggle desperately against the dangerous undead. With zombie numbers exploding, people without a home to return to, not knowing if they will survive. In the animated prequel to the global breakout hit 'Train to Busan', see where the horror started...
Directors:
Sang-ho Yeon
Producers:
Dong-ha Lee, Youngjoo Suh, Sang-ho Yeon
Voiced By:
Franciska Friede, Seung-ryong Ryu, Joon Lee, Sang-hee Lee, Eun-kyung Shim
Writers:
Sang-ho Yeon
Aka:
Seoulyeok
Studio:
StudioCanal
Genres:
Horror
Countries:
Korea, Horror

Following the success of Yeon Sang-ho's Train to Busan, now we have Seoul Station – an intimate take on a zombie apocalypse in Seoul, South Korea. The animated film focuses on a small group of survivors who try to put their differences together in order to, plainly said, survive. In a poetic swirl of justice, Seoul Station was actually made earlier than Train to Busan, but the filmmakers and producers worried that the former would tank at the box office, and so they decided to delay its release until the right time would come. That time is now, and as an avid zombie + animation fan, I’m glad that it happened.

To continue with the inevitable comparison between Seoul Station and Train to Busan, it’s clear that the latter is made to appeal to a wider range of audiences, while the former is more similar to, say, George Romero’s ‘Night of the Living Dead’ – akin to a tighter pocket of audiences of the indie horror culture. With that being said, Seoul Station is by no means a commercial zombie flick, and so the worries of the producers for releasing this film suddenly seem as justified as ever.

That isn’t to say that Seoul Station is not a competently done film, but quite the opposite: it exudes with originality and has greater depth than the majority of zombie horror flicks nowadays, animated ones included. Inevitably, one would ask if there are any similarities between the two films. The short answer is: no. Seoul Station is a standalone feature with no connections to Yeon Sang-ho's live-action zombie flick.

Further, the film gets going through the eyes of very out-of-place characters, including a prostitute named Hye-sun (voiced by Shim Eun-kyung) and her good-for-nothing boyfriend Ki-woong (excellently portrayed by Lee Joon), a homeless man without a name, and Suk-Kyu (Ryu Seong-ryong) – a man who claims to have a blood relation with Hye-sun. The characters are very compelling and are portrayed in a very realistic manner; hence the film’s ability to delve deep into their histories and showcase how ordinary people (not MI6 types of heavy-armed blokes) would survive a perilous circumstance such as a zombie outbreak. Needless to say, you have to see for yourself how these characters navigate through the wreckage (both mental and physical) of Seoul.

Something worth mentioning is the social critique that Seoul Station imposes onto the viewers; this is mainly shown through the two homeless men who, amidst all that wreckage, are frowned upon by Korea’s “upper” class and are basically shun away from society. Needless to say, Yeon Sang-ho's social commentary is alive, well, and kicking.

Finally, is Seoul Station a good zombie flick? If you ask me, yes. See it for yourself and then we can debate.