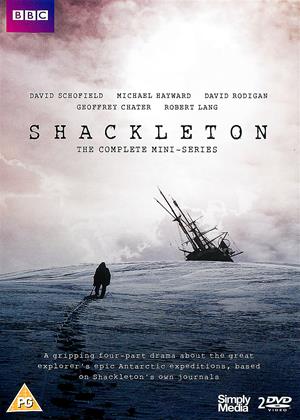 Shackleton is a gripping polar adventure exploring the deeds and frosty tribulations of none other than Sir Ernest Shackleton (played by David Schofield) – one of the great (if not THE greatest) explorers of the 20-th century. And so, Shackleton considers both the inner and external workings of these brave people and their leader, whose thirst for the unknown it seems can never really be quenched. To this extent, Shackleton delivers a very real, palpating, and pulsating experience that would shake the foundations of what it means to be human and brave – forever.

The four-part series follows Ernest Shackleton and his men in a final attempt to reach South Georgia, all the way from Elephant Island in the South Pole (a journey estimated to be approximately 800 miles). However, the expedition is forced to do this perilous task in a lifeboat (the now infamous James Caird), instead of their previous vessel – the Endurance. If they succeed in their intentions, they will have to traverse dangerous island’s dangerous mountains in order to reach the other side to get help. Will they succeed? Despite the knowing historical evidence, it’s good to go in Shackleton with a clean slate if possible, since that way you can experience the thrills and chills as if you’d been a part of the crew for the whole duration of the series.

As per the film’s technical details, Shackleton is satisfactory, but the DVD rework lacks details and often feels kind of dull. This is not the original filmmakers’ fault per se, but it’s rather an unfortunate, even collateral concatenation of circumstance. With that being said, Shackleton is mostly set in the vast landscapes of Antarctica, so the opt in for a bleak and cold color palette is very much understandable, if not downright justifiable. Do not go into this to expect Frozen Planet-type quality, but take it for what it is: an impressive historical occurrence with lackluster technical details and additional narrative tension for achieving a dramatic punch.

The sound is robust and accompanies the series pretty well I might add, without any distortions or breaks in the audio threshold. In addition, the score is crystal clear and never comes before the dialogue, which on the other hand – gets the job done. In this regard, the soundtrack can be regarded as better than the visuals themselves.

Now, the story. Shackleton is structured almost perfectly, blending the actors’ own emotional channelings with those of the pre-supposed historical characters that they portray. Ultimately, the four-part series is an excellent take at courage, bravery, camaraderie, and the will to overcome obstacles despite minuscule chances of success. A must-see for anyone interested in exploration, adventure, and history (especially history buffs).