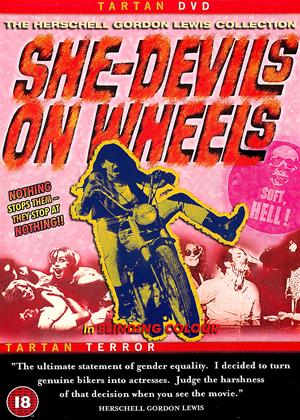 Reviews (1) of She-Devils on Wheels

I suppose you have to give some sort of kudos to a film about psycho nympho man-hating militant feminist bikers who are heavily implied to be the lesbians they logically ought to be, yet are somehow rampant heterosexuals with a harem of strangely submissive men, directed by a college professor who invented the splatter movie genre in his spare time because his day-job didn't pay enough.

It's ahead of its time in that its major protagonists are for all practical purposes amoral, and the theme song is actually rather good. Doubtless numerous much later trendily ironic cover versions exist. In all other respects, including technical, this film in no way transcends is visibly barely-existent budget. There is zero inspiration on display here. Rarely have I seen both male and female sexuality portrayed in such a depressingly negative light in the same movie (which is especially surprising given that nobody of either sex takes their clothes off). Women are evil nymphomaniacs, therefore men have to be depraved rapists who need to go a lot further than rape to upset those psycho bitches. And so on.

There's no plot to speak of. The biker action is minimal, since Herschell Gordon Lewis couldn't dream of the resources that even Roger Corman commanded, therefore instead of massed phalanxes of the actual Hell's Angels, we get about eight ladies with "Man Eaters" hastily stitched on their jackets tootling down the highway and doing some very brief and sedate "racing" somewhere or other that clearly isn't a public road. And the fight scenes are about as well choreographed as the sex these people are supposed to be having with most of their clothes on.

This is an exploitation non-classic which is legendary by reputation rather than content - the title is better than the actual movie. Though if you do feel obliged to watch it, have fun counting how many times you see that very bad (and visibly wrinkled) painting appear and spin rapidly for a few seconds to indicate a change of scene. But be sure to keep your finger near the mute button if it looks as though any two characters of opposite sexes might like each other enough to have a bit of meaningful dialogue.

Alternatively, rent "Faster, Pussycat - Kill! Kill!", which covers almost identical territory, can't have cost much more, was made by an equally cynical exploitationeer, and yet is somehow about a thousand times more entertaining. And the theme-tunes even better!