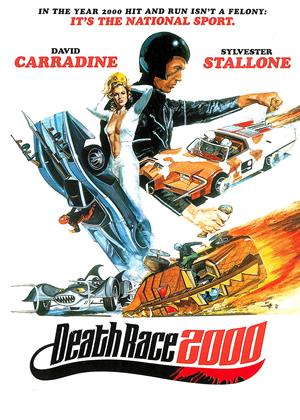 There can be few films referred to so frequently and yet so rarely seen. It is a dark comedy well before anything else so slapstick but so dark. The race was set 25 years in the future in 1975, (but of course is now 14 years in the past). The object is to kill elderly pedestrians. It is much funnier than you might expect for a film featuring Stallone and much less amateur. Apart from Stallone the acting is pretty good for such a low-budget simple comedy. There is a sort of sub-plot about the President living abroad and the politics being so corrupt but this is not much explored, it is a knuckle dragging, laugh out loud, silliness.

In this pitch-black comedy produced by the legendary Roger Corman, we basically see what would happen if Dick Dastardly went head-to-head with Mad Max (whose franchise was directly inspired by this film). 21st. century America, which, like all low-budget futures, looks amazingly similar to the USA in the year the film was made, is a grotesquely cynical dystopia where life is cheap, entertainment for the masses has reached the ultimate low, and the xenophobic hypocrite who runs the place blames all the nation's woes on the few foreign countries he hasn't invaded yet. Like I said, this is an absurd sci-fi satire bearing no resemblance whatsoever to the way things actually turned out, or look as though they just might. Of course not.

The idea of a sport in which the competitors score points by killing random passers-by, with an emphasis on desensitizing the masses to the notion of casually murdering anyone who is either a burden to society because they're old, or likely to increase the population because they're a young woman or a child, is as dark as they come, and the scenes in which people do suicidally stupid things just to briefly get onto a hugely popular reality TV show are alarmingly prescient, as well as being much easier to believe than the concept of David Carradine (in a gimp suit!) once having been a far bigger star than third-billed Sylvester Stallone.

Naturally you have to cut this utterly insane little movie some slack for its low budget, but like the best of Corman's cheap and cheerful output, it uses what money it has extremely well. A modern remake with state-of-the-art special effects could have been outrageous fun, but, just like the reboot of "Robocop" (which borrows some of its grim vision of the future from this film), they dumped the savage humor in favor of a toothless tale which existed primarily to be resold as a computer game. Check out the one and only original instead, with its cast of ludicrously horrible characters (Sly plays a thug who not only casually brutalizes women, but is so moronic that he can't eat without getting half the food on his face), its ridiculous cartoon death-traps, and its vision of a future in which idiots in fancy dress will play chicken with weaponized cars driven by psychopaths just to be on national television for a few bittersweet moments. Which, of course, could never happen for real...