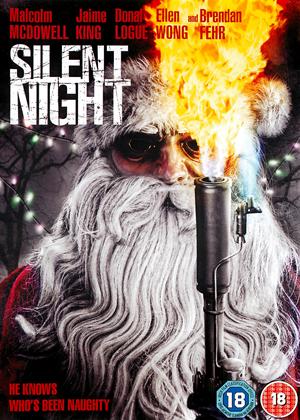 A small American town pays host one Christmas to a maniac dressed as Santa Claus. Rather like Salem’s Lot, this town is frequented by often very flawed characters who one by one, succumb to terrifically staged, grisly fates.

My feeling at the beginning was that Sheriff James Cooper, played by the mighty Malcolm McDowell, who often seemed to magically turn up at the scene of the various crime, was somehow linked to the malevolent Claus. To cast McDowell as a mere Sheriff seemed unlikely to me. Maybe I was right?

Deputy Aubrey Bradimore (Jaime King) is the unfortunate who is seconded to the spree. Anytime any of the townsfolk are ‘naughty’ – and there are plenty who are – it seems Father Christmas isn’t far behind. You can hear his heavy breathing behind his improvised, bearded mask.

The running time is made up of sinners hiding behind a veneer of respectability, suspected by none except Santa. This makes him a kind of red-hatted avenging spirit. The premise and outrageous killings are over-the-top and often quite silly, and yet this remake of the 1984 ‘Silent Night, Deadly Night’ weaves in several plot moments from the real-life 2008 Covina massacre.

Director Steven C. Miller and writer Jayson Rothwell ensure that events are staged in a very television-drama style, and as such, the minor indiscretions of the characters have a soap-opera feel about them. For the ongoing fascination for a truly Bad Santa, this is enjoyable, but a fairly standard slasher.