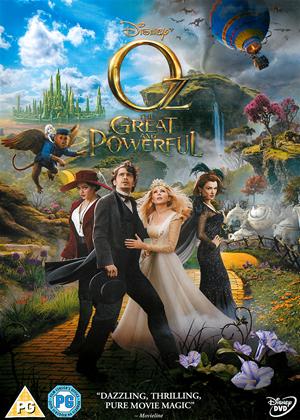 Synopsis:
When Oscar Diggs (James Franco), a small-time circus magician with dubious ethics, is hurled away from dusty Kansas to the vibrant Land of Oz, he thinks he's hit the jackpot-fame and fortune are his for the taking-that is until he meets three witches, Theodora (Mila Kunis), Evanora (Rachel Weisz) and Glinda (Michelle Williams), who are not convinced he is the great wizard everyone's been expecting. Reluctantly drawn into the epic problems facing the Land of Oz and its inhabitants, Oscar must find out who is good and who is evil before it is too late.
Putting his magical arts to use through illusion, ingenuity-and even a bit of wizardry-Oscar transforms himself not only into the great wizard but into a better man as well. When small-time magician Oscar Diggs (James Franco) pulls one flimflam too many, he finds himself hurled into the fantastical Land of Oz where he must somehow transform himself into the great wizard-and just maybe into a better man as well.
Actors:
James Franco, Michelle Williams, Rachel Weisz, Mila Kunis, Zach Braff, Bill Cobbs, Joey King, Tony Cox, Stephen R. Hart, Abigail Spencer, Bruce Campbell, Ted Raimi, Tim Holmes, Toni Wynne, Rob Crites, William Dick, Gene Jones, John Lord Booth III, Suzanne Keilly, Shannon Murray
Directors:
Sam Raimi
Producers:
Joe Roth
Writers:
Mitchell Kapner, David Lindsay-Abaire
Studio:
Walt Disney
Genres:
Action & Adventure, Children & Family

Reviews (3) of Oz: The Great and Powerful

I can't decide what is most irritating about this movie.

Is it the fact that it's overlong? Or that its soundtrack sounds like something James Horner wrote to accompany warships? Or maybe the overuse of CGI animation that, despite the attempt to impress, are not a patch on the hand-made 1939 'decorations'? Maybe it's the weird china girl which is I think a completely unnecessary character who was probably only added for gender representation reasons (and she is well spooky too!)

So what is it?

Well, it's the point at which Oz states that Edison invented the lightbulb, the phonograph (recorded sound) and the cinemagraph (film) - which is all a load of UTTER TOSH (a lie, basically)

Despite what ill-educated Americans think (and I refer to high school teachers here too), Thomas Edison invented nothing at all. Yep that's right - nada, zilch, sweet FA. He took others' inventions and developed them brilliantly, and was a genius at that, but he was NO an inventor as such as invented nothing new.

The lightbulb was invented by Joseph Swann, a Brit, and recorded sound and film were invented by several people at the same time arguably - British, French and German. But it sure weren't Thomas Edison, honey. That fact that this is a plot point in this film and repeated ad infinitum as truth so irritated me that I almost turned off.

However, I persevered and can say that, in parts, this film is entertaining - especially the start, ironically, before all the CGI stuff starts (some funny lines here). And there are some nice scenes with witches towards the end - and a handful of laugh-out-loud funny lines (some from Jewish stand-up, I think).

But really, it's all too long and too overblown - and promotes a lie to the world too!

Do yerself a favour and watch the brilliant original Wizard of Oz instead.

what was the point? - Oz: The Great and Powerful review by AP

This was film made by bankers.

Indifferent acting (you could tell that they really wanted Jonny Depp and Kim Basinger).

CGI which was less impressive than the original film.

But (and most importantly) - they didn't really know why they were making it - a very thin plot stretched beyond braking point.

I watched the 3d version - Oz: The Great and Powerful review by CS

Was good in 3d. Good effects. One for all the family, some humour will go over children's heads, but the Wicked Witch ????? will delight the kids.

Set up as a precursor to the famous story of Dorothy, Toto, the Tin Man, Lion and Scarecrow Oz the Great and Powerful tells the story of how the legendary Wizard of Oz came to be well, the Wizard of Oz.

Oscar is a circus magician and self confessed con-man living in the black and white state of Kansas at the turn of the 20th Century. Breaking the hearts of pretty girls all over the state Oscar travels around performing deceptive and lucrative tricks; things change however when he is suddenly swept up into the eye of a twister, thrown down a waterfall and lands at the feet of three witches in the magical land of Oz.

Heralded as the saviour of the land (saviour of what exactly is not made entirely clear but it involves evil witches and that, apparently, is enough to satisfy our curiosity about that) Oscar is whisked away by the good witches, down the yellow brick road and into the Emerald City itself. The story that follows is your typical tale of redemption, with some magic and munchkin’s thrown in, neither of which is really enough to justify the film’s more than two hour run time.

Despite the flaws in the story Oz the Great and Powerful is a fairly entertaining watch; visually the film is almost unparalleled in it’s efforts to export the audience to a gorgeously vivid and colourful fantasy land, whilst the performances by James Franco in the lead and Mila Kunis, Rachel Weisz and Michelle Williams as the good witches are all great casting choices and help move the story along nicely.

Scrubs fans also look out for Zach Braff finally getting a little recognition for a role in another version of the Whiz.

What I was a little disappointed by was the film’s reluctance to reflect and reference its musical parent, MGM’s 1939 classic the Wizard of Oz. As a film fan one feels that film makers and theatre goers alike could have had great fun had their been some more intertextual tongue in cheek nods to the original, instead however the film remains steadfastly child-friendly and ultimately that means that adult audiences should be prepared for a bit of boredom.