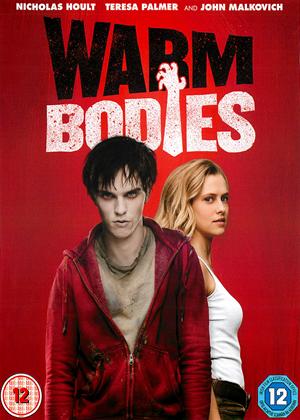 A zombie film that won't leave the kids with nighmares! - Warm Bodies review by Karrie

I chose this because my 13 year old wanted to watch a horror film. The reviews didn't mention the scary word. It is a 15, but the single use of a certain swear word seemed to be the only reason a lowly non-censor trained person could identify. The zombie scenes are suggestive of the horror of zombies but not excessively graphic or violent.

And the outcome.....my teenager loved it. The story was entertaining, I watched it all without complaint, no-one was scared. The film was funny (it was meant to be), wasn't too "suspend your belief in real life" (I got annoyed with the electricity supply, car security systems and road quality better than most of the UK after 8 years of no road crews - but I'm a pedant).

The Cinema Paradiso critic review is spot on, as is the other customer review - "surprisingly watchable" - but we gave it 5 stars because the whole family were prepared to watch it again!

Loved the trailer for the film so ordered it, best dicision ever ! Its brilliant , definitly my kind of humor even the other half liked it. Have watched this movie twice and will be watching again before sending back

An incredulous movie - Warm Bodies review by BE

.........but who would expect a movie about Zombies to be otherwise! Surprisingly watchable with good acting. It just goes to prove that love can conquer all!

Is it just me or are there a lot of zombies around at the moment? Don’t get me wrong I’m very much a fan of the genre stereotype and am thoroughly gripped by AMC’s excellent horror/drama the Walking Dead – the most notable difference between that show and the movie I’m about to review is the character development, where one burns slowly and constantly changes in time with believable emotions, the other is rushed and overplayed.

Warm Bodies is a Romeo and Juliet style story, but for zombies. A young corpse, known only as R, lives in an abandoned airport with various other zombies happily, er, “living” his life - whilst the few surviving humans live in a walled city a short distance away. Julia, the daughter of the leader of the human resistance, ventures outside the walls on a reconnaissance mission with her boyfriend Perry, only to encounter R and his buddies on a shopping trip of their own. When R consumes Perry’s brains however he finds himself filled with the thoughts and memories of the now dead fighter, and can not help but be drawn to Julia. Rescuing her from the other zombies R brings her back to his aeroplane home where he tries to keep her safe and she tries to understand how a zombie can feel empathy.

The story itself is pretty good, albeit somewhat predictable, and I really loved the zombie narration aspect of the piece, what spoiled things for me however was the film’s apparent rush to develop R from a monosyllabic, groaning zombie to a normal young man (I am assured there is a subtle difference). A couple of really great narrative tools, such as the single beat of R’s heart early on, would have made for an excellent complimentary resource alongside a slow and subtle development and change in character, instead however R simply finds himself able to say more and more frequently. What I had hoped for was a gentle change in his posture, the colour returning to his cheeks perhaps, instead however the character leaps forward, bounding across steps of development and arriving far too quickly at the point of semi-humanity he inhabits for the majority of the film.

I have to say I still enjoyed the piece, it’s nice to see Nick Holt in a role that doesn’t make me want to punch him (unlike his starring role in Channel 4’s Skins) and the story had some real potential, overall however it just hurried through the more important aspects of character to get through the story itself.