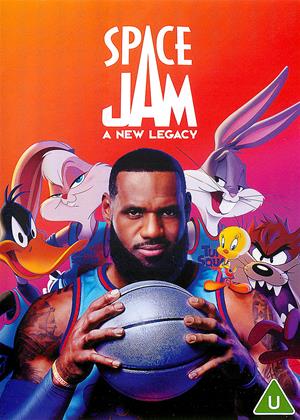 Rent other films like Space Jam: A New Legacy

Space Jam was such a weird concoction of the 1990s. Who would have thought that something as odd as Michael Jordan playing basketball with Looney Tunes against aliens would be a surreal pleaser of a blockbuster? So many dominos aligned for this to happen in a film that played off so much of the era, ranging from Michael Jordan’s commercial viability to Bill Murray's strange ad campaign to the street branding of Looney Tunes. There are also the silly cameos and the iconic soundtrack. It’s not exactly the greatest film of the decade but certainly one of the more fascinating for even existing.

There’s little mystery why A New Legacy exists. After so many late sequel revivals and the blatant appeal to nostalgia with the fan-service heavy Ready Player One, a new Space Jam is perhaps the softest sell to make right now. A film packed with Looney Tunes and Warner Bros references while promoting a mega basketball athlete? Sounds like a solid package for an ensured box office draw (at least to executives who look at marquee value).

LeBron James now steps into the extra-comfy role of playing himself. He has grown up shirking video games for basketball, a prospect that his son Dom does not share. Dom would much rather go to E3 than basketball camp. Appealing to Dom’s desires to prove himself is the Warner Bros algorithm, who just happens to look and sound like Don Cheadle. The algorithm lures Dom and LeBron into his digital Tron-like world. While Dom partakes in developing his own video game, LeBron is forced to forge a team of Warner Bros characters to compete in a basketball game. Of course, it will be all Looney Tunes characters but more because of the desires of Bugs Bunny to get his gang back together and because there’s a time limit on building a roster.

The premise itself is not too shabby. The original Space Jam relied a bit more on inexplicable events. A New Legacy actually has staked for all concerned. LeBron wants what’s best for his son but learns that he has to be more open and accepting in addition to just having more fun than work in his life. Dom needs to be honest as well but also think more critically of what ambitions he wants for himself. The algorithm wants to be loved but instead favors hostilities by kidnapping others for his own suitable needs of digital conquest. Bugs Bunny needs to learn the value of sacrifice (I guess) and how to be a better leader.

There are bits and pieces of a decent story here. For instance, I like how the Looney Tunes are overly confident in their means of committing to basketball with cartoon logic that always saves the day. But when they transform into CGI creations for the algorithm’s basketball game, they seem to lose their toon powers. Well, not really. It’s kinda implied but not very. It would be an interesting turn, however, by forcing the Looney Tunes to form different strategies. That may seem too serious for a Looney Tunes movie but, wow, this movie already brimming with a certain pretentious nature by making the game more epic than funny.

The biggest crime of A New Legacy is that it’s just not witty or funny. The film spends so much time winking that it forgets to have the teeth that Looney Tunes was usually known for. If HBO Max’s latest slew of Looney Tunes cartoons were a masterful return to form, this film makes them seem so stiff and bereft of comedy. Daffy Duck spends more time being mildly snarky than silly. Porky’s biggest laugh is when he attempts to rap rather than his slurring of words in speech. Granny is old and makes all the standard old jokes. Lola is just a good athlete and that’s about it for her. When did the Looney Tunes become so tired and lifeless with comedy? There may be a reason why the algorithm decided to split them up in the first place.

As for the hordes of Warner Bros references in the background, they’re about as clever as their usage in Ready Player One. In other words, they are meant to be amusing for even being in this picture at all. But, seriously, this is the second time in the past five years that we’ve seen the Iron Giant launch onto the screen in CGI. The whos-whos in the background becomes tiresome because there comes a point where you just expect and accept them all being there, where the additions of everything from King Kong to Frankenstein Jr become par for the course. After a while, I tired of these shots because I knew nothing interesting would come of them.

Space Jam: A New Legacy comes about corporately produced as advertised. It takes aim at Warner Bros but more for making them look good than make any insightful commentary that Looney Tunes are more than capable of handling. It features lots of references but does nothing unique with such inclusions. It has some stellar visual effects in nearly every shot but it’s all in the service of making this film look more glossy than it is giddy. Sure, the first Space Jam movie was more or less a corporate product but occasionally roasted and satirized parts of the industry. A New Legacy merely stays firmly in a lane where none of those smarts are present, robbing this commercial movie of being anything more than easy WB marketing.