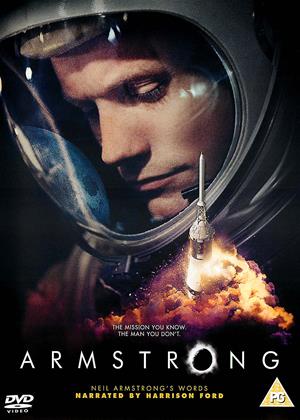 Synopsis:
Neil Armstrong'became NASA's most famous astronaut when his small step, and giant leap changed the world forever on July 20 1969. Famously reticent about his accomplishments he preferred to focus on the team that helped to get him on the Moon rather than his own success. This new documentary features never seen before footage from Armstrong's own home movies and insights from those who flew with him and knew him best.
Actors:
Harrison Ford, Neil Armstrong, Mark Armstrong, Dave Scott, Gerry Griffin, Christopher Kraft
Directors:
David Fairhead
Producers:
Gareth Dodds, Keith Haviland
Voiced By:
Harrison Ford
Narrated By:
Harrison Ford
Writers:
Mark Armstrong
Studio:
Altitude
Genres:
Children & Family, Documentary, Special Interest

Interesting but not insightful - Armstrong review by Other Worlds

It can't be easy making a documentary about a man as emotionally controlled and as taciturn as Neil Armstrong but David Fairhead makes a creditable attempt.

A notable absence from the movie is Buzz Aldrin , the only actual witness to the Armstrongs most famous moment and either he was not asked or chose not to involve himself ? Very odd and a real weakness in the documentary.

The film is mostly made up of interviews with people who knew him personally and professionaly; what film there is of Armstrong talking is composed entirely of non-candid moments speaking to the press etc.

The family movies are mildly intersting , not informative particularly ( they are silent ) and Harrison Ford reads from some of Armstrongs private writings , presumably made available by the family, and they helpful in providing some insight into the man. Insights that he never voiced to camera himself. I did wonder how open the family were at providing access to all his writings however. There is,if not a suggestion of hagiography , then definately a very selective history on display.

No reference at all , for example, is made of the allegation of medical malpractice made by the family against the hospital where Armstrong died .

In the end if you are interested in the man , then you would be better off i.m.o watching Damien Chazelle's movie 'First Man' a completely different genre , drama vs documentary ,but really I think you need the drama to give the guy a, fully deserved, 3rd dimension.

Moderately interesting but there was little here that hadn't been covered in the two BBC documentaries on Armstrong - Christopher Riley's "Neil Armstrong - First Man on the Moon" and Andrew Smith's "Being Neil Armstrong".

For me, the most revealing contributions were Chris Kraft's observations on Buzz Aldrin. “I didn’t dislike Aldrin. Didn’t like him either."

Almost forgotten today but the first moon landing in 1969 was a major world event and it marked a feeling of a big change for the world, a change that sadly did not come to pass but if you remember being caught up in this historic event this documentary rekindles the feeling of hope that was rife at the time. As a documentary this has huge interest looking into the life of the first man on the moon and revealing a life tinged with tragedy and a workaholic sense of duty that cost him in his personal life. Admittedly this lacks the sheer spectacle of the 2019 documentary Apollo 11 but if you are interested in the Gemini & Apollo space missions this is worth checking out. It's a straight forward, no frills film that uses archive footage and interviews with family, friends and colleagues to tell the life story of Neil Armstrong, it's obviously dominated by the moon landing itself but it's in the private life that there is a human story worth checking out.

As it's 5 decades since the first moon landing, there has been a lot of coverage, including films like First Man, Apollo 11, documentaries on TV, and now Armstrong, which focuses on the man himself. No matter how much I watch about this historic event, I am always filled with a sense of wonder, and in this film I still discovered facts that I didn't know...or had forgotten. It's impossible to capture the true essence of one man's life in 100 minutes, but that doesn't mean that the film fails in giving you interesting facts about one of the most famous men in history.