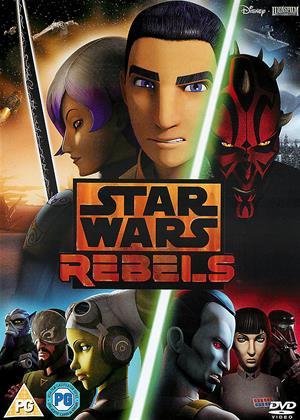 Fabulous season with some major developments to tie in with the live action movies - Star Wars Rebels: Series 3 review by Tej

Star Wars Clone Wars animated series was for me the superior saga and dared to tell all its stories, without resorting to kid friendly antiques and dumbing down of dark themes. But with Disney taking over, Clone Wars sadly, came to an abrupt end with unresolved story threads. I so hate when that happens as I feel robbed and screwed over but that's how these things roll with TV networks, so I just had to move on.

Disney then brought to us a very kid friendly first season of Star Wars Rebels which whilst enjoyable for all the family, had too much of a kiddies vibe compared to the Clone Wars. But its Star Wars and the Ghost crew grew on me enough to want more.

Second season came along and it rocked as more and more characters from the beloved live action saga came in and story arc developed. And more important for me, personally, much reference was made to Clone Wars to make me feel that they are encompassing everything in Clone Wars as canon lore to Rebels and even tying up major unresolved threads from it.

And now this third season comes along with tremendous maturity and even concluding unresolved threads from Clone Wars....thank you, Disney...finally, some respect for older viewers! But more importantly, this season heavily bridges the gap that leads to Rogue One and A New Hope. One huge reason for this, of course is that creator/director Dave Filoni worked on both sagas and is delivering the best he can under the new company's constraints (or freedom, whichever way you look at it).

This season is full of excitement and punch the air moments with some of the Ghost crew characters getting their moments to shine. The standout episode for me was a Sabine centric, Trials of the Darksabre and the geekiest satisfaction episode was Twins of the Sun.

The fourth season is said to be the last which is all good with me as the writers will have the opportunity to bring proper closure to a fine animated saga that potentially leads into Rogue One/New Hope.

As usual, the DVD consists of "recon" behind the scenes for each episode which are very informative about each episode's connection with the SW live action/animated/books/games canon.