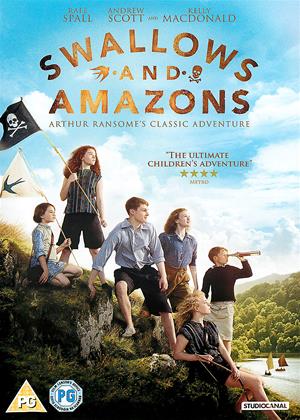 Reviews (3) of Swallows and Amazons

What shame and a Travesty A missed opportunity. - Swallows and Amazons review by Bob

I was looking forward to settling down to watch the new “Swallows and Amazon” film in great expectation but, sadly, it was a great disappointment. Why, oh why did they feel the need to update and change the story? “The Arthur Ransome book “Swallows and Amazon” is a much-loved classic, a complete and cohesive story that doesn’t need embellishment or updating. It is a period piece and all the better for that; updating it to a ‘cold war’ setting was unnecessary and destroyed much of the charm of the original and just got in the way of the real story.

The film does pay some ‘lip service’ to the original book, such as the references to ‘grog’ and ‘pemmican’ but being dropped in, out of context they became an inane distraction. The island setting was a good representation of the book’s Wild Cat Island but there were some glaring errors. The ‘hidden harbour’ should have been a small, hidden, rocky inlet surrounded by trees, not just a few rocks stuck upright on a straight bit of shoreline. The significance of the harbour was blurred over and lost in the up-dated plot.

The cast worked manfully at their parts but the ‘miscasting’ of the two younger Walker children, played by actors a year or two too young, made a mockery of some key aspects of the (original) story. I still don’t understand why they changed the name of ‘Titty’ Walker to ‘Tatty;’ it added nothing and detracted from the character’s believability.

Swallows and Amazons is a wonderful story that didn’t need any changes or ‘up-dating.’ Moving it to the cold war period (1950’s?) destroyed the original plot line and added nothing except shoe-horning a hyped-up attempt to insert some unnecessary and distracting drama. The film should have been made with a camera in one hand and Arthur Ransome’s book in the other not a camera and a misguided desire to ‘enhance’ a perfect story.

True fans of Arthur Ransome should not bother with this version but get the wonderful 1974 version which is a true reflection of Ransome’s genius.

The 2016 film is a disappointment not to say a travesty, What a shame and what a missed opportunity!

Good modern update to the traditional, not overly true to the books, but very enjoyable - Swallows and Amazons review by AP

Watched the Virginia McKenna version and then this. Whilst the earlier version is much more true to the books in feel, it is also very dated. This is much more modern in pace, though with sufficient period feel (and the same locations on the island as the earlier film.

As a family we enjoyed it more (though my kids, 11,13& 15) have yet to all read the books. The section with the flying boat was just the right side of the thrilling/scary divide, and whilst not in the books, was a nice twist {with links to the author's past} that I felt it could be justified.

Don't expect a slavish reworking of the books, but a good children's yarn with a touch of the "39 steps".

An Unwelcome Disappointment - Swallows and Amazons review by SW

I have to admit the following; I grew up reading the Swallows and Amazons adventures by Arthur Ransome, and having re-read them recently (long story) I was looking forward to the film. The Seventies film of the same name was a disappointment; wooden and stilted, but it did remain mostly faithful to the book given the restrictions of time etc.

This offering started with the book obviously, and then apparently began to remove any possible spoken areas of offence that could have been caused by the age of the material and its (now) unenlightened prose. This was inevitable and I paid it no real heed. However, a further editorial process took place that forced upon the story an anachronistic and rather preachy series of messages regarding 'safety'.

This was demonstrated repeatedly but especially by a contrived near drowning of Roger that never took place in the book, because Roger wasn't stupid to the point of imbecility in the book. The 'stranger danger' in the form of a frankly ridiculous scene with the charcoal burners left my wife and I aghast; their meeting is delightful in the book and leeringly threatening here. This coupled with the dreadful personalities of most of the Swallows and half of the Amazons that to me was simply inexplicable as they displayed nothing of the kind in the book.

The spirit of the book, teamwork, adventure and enjoyment of simple pleasures and imagination was replaced by sulky teens being destructive, incompetent, argumentative liars. The Swallows were bad enough, but the worst for my Wife and I was undoubtedly Nancy Blackett, the leader of the Amazon Pirates. How one of the most positive portrayals of a cheerful, capable, strong and independent young girl in print anywhere could be allowed to have been reduced to this spoilt nonentity is beyond me. I shall take the nightmare vision of a petulant, sulky Nancy to my grave. As her character was wont to say in the book, "Barbecued Billygoats!" And to think that Ransome was accused of being a sexist Edwardian misogynist; the irony is almost painful.

This was supposed to be a children's film about children experiencing the joy and excitement of exploring and simply being children, a 'war' between Explorers and Pirates being the central narrative. Adults had a secondary part in the book, not here; SPIES for heaven's sake were most of the story. Watch this by all means and then read the book if you wish, but under no circumstances reverse the procedure.

Swallows and Amazons is a film based on author Arthur Ransome’s children novel and features kids messing in and around the Lake District in North-West England. Ultimately, the film boils down to a well-told inordinately British saga including a CGI-barren story for the ages and comes off as a godsend among other excessively stylized features that assault the senses in all ways imaginable. To sum it up: Swallows and Amazons is an innocent, albeit showing off some thriller elements here and there, take on childhood that tries to answer the penultimate conundrum of why playing outside is better than staying indoors whilst glued to a screen.

Philippa Lowthorpe helms this flick into clear waters since the past provided a large chunk of materials as a general point of reference, including the 1974 incarnation by director Claude Whatham. This time however, the plot is carefully ‘tuned in’ to find its appeal among audiences of contemporary origins and is subjected to the highest filming standards known to date. As filming techniques change, so does the heart of what made Swallows and Amazons stays put; to top even that: this newest embodiment fills some holes left by both the original author and whatever followed his ruse; and confident in her directing abilities, Philippa Lowthorpe rises to the occasion to bring us a politically correct film which appeases to all ages possible, which I mean it sincerely, and in a derogatory-free way.

Few caveats exist however, despite the production team’s great efforts to translate the material to screen. Technical sailing terms like raising sales and stepping up masts abridge to one-liner exclamations of the generally profound type (“Faster, we’re losing them…”). This is understandable since not many old-school sailors attend film premieres these days. For the ones that do – perhaps you should find your sailing entertainment elsewhere.

Apart from that, Swallows and Amazons is a treat to look at, with its gorgeous wide shots of nature and the sea for which the urban landlubbers, myself included, yearn to experience – if for a short moment in time. The British countryside never looked better on film.

The acting is above average, featuring kids who have great chemistry while they quibble together on-screen and joining them for a ride are two independent Amazonian girls in a conflict that is both fun and at times mettlesome to watch. The adult actors provide for a more serious approach that would enable some enjoyment for the adults attending their children at theaters.

Swallows and Amazons carries a heavy seal of the British identity which worldwide audiences will (probably) have hard time connecting with it. Apart from that, Swallows and Amazons from 2017 is perhaps a classic in the making for many years to come.