Rent Alice Through the Looking Glass (2016) 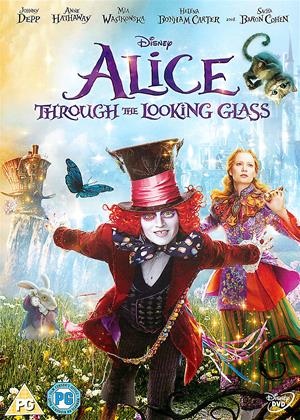 Rent other films like Alice Through the Looking Glass

Reviews (2) of Alice Through the Looking Glass

confusing - Alice Through the Looking Glass review by JJ

Much prefare the old Alice in wonderland, but its worth a watch if you or kids are not easily distracted. As its a little confusing for kids & definitely confusing for me ?

What with ScissorHands, and Pirates, and Alice, is a wonder J.D. has a grip on reality at all. Some people did not rate this sequel, but the colour and dynamics are still there. The surreal hatter, with the historic disability of his profession , is just as bizarre as the first film. Adult-kids, and kids, will enjoy again...............

Could you, would you, won’t you indulge a sequel? Perhaps I may, perhaps I might. While I wasn’t impressed with Tim Burton’s Alice in Wonderland, its sequel could be the one to win me over. But without a proper story, motivation or likable characters, this project was doomed to fail. It couldn’t, wouldn’t, will not improve itself.

When Alice in Wonderland made a massive mess of box office money, Disney was quick to order a sequel. But what more is left to explore of Alice or Wonderland? Not much, apparently, as the script struggles to find a reason for Alice to both return to Wonderland and have something to do in Wonderland. There’s a squabble of marriage and business in reality, a problem that is easily solvable. Alice apparently lost all that determination and courage she gained in the last movie. She can slay a dragon, but can’t stop her evil ex-suitor from taking her father’s ship. I guess she has to go back to Wonderland to refuel her bravery.

But Wonderland has a problem and they need Alice’s help. The issue is regarding the Mad Hatter who appears to be madder than usual. Apparently he misses his family that was taken from him. This was a side character from the first movie who didn’t have a whole lot to do and didn’t exactly form a strong bond with Alice. So I’m not exactly sure why Alice feels the need to help this character. What’s the consequence of the Mad Hatter going more insane? He’ll die. And we can’t have Johnny Depp’s character die because then there’s no movie and no money to be made.

To get back the Mad Hatter’s family, Alice must travel back in time with the help of the time-controlling character, Time (Sacha Baron Cohen). But Time isn’t willing to help because his devices for time travel could destroy all of Wonderland. Is it worth destroying all of Wonderland so that one character can get his parents back? Again, no movie if Alice doesn’t take this risk. But the evil Red Queen (Helena Bonham Carter) is onto Alice’s scheme and wants the power of time to alter Wonderland’s timeline for herself. Namely, she wants to prevent the series of events that led her to being the big-headed matriarch she appears as in the present.

Did we really need to hear Wonderland origins? Do I really care about the Mad Hatter’s family or why the Queen’s head is so big? This is Wonderland! It’s supposed to be weird and random. Explaining all this backstory takes away from the surrealness of it all. And the more time the movie wastes trying to give reason for the characters and their crazy nature, the more jarring Wonderland becomes.

There are some dazzling visuals here and it’s clear that Disney put a lot of effort into this production. The seas of time were a nice touch and a rusted-over Wonderland looks rather spectacular. So grand were these special effects that it’s a shame the same amount of attention wasn’t paid to the characters. The abundance of CGI characters who were once amusing in the first movie are now annoying. There’s so little for most of the characters to do in this watered down story that most of them are bouncing up and down like idiots trying to be noticed by the camera.

The Alice franchise is officially out of ideas. The use or time travel and origin stories is the type of story that you usually apply to a TV show when you’re running low on original premises. The fact that Tim Burton didn’t direct this picture and turned it over to his C-team proves that there wasn’t enough here. There’s no reason to go back to Wonderland and I wasn’t exactly eager to return either. There’s nothing left to lift from the books. The tank is dry of wonder and silliness. If Disney is ignorant enough to turn this into a trilogy, there’s only one path left: body switch. Alice and the Mad Hatter will switch bodies as will the White Queen and Red Queen. Hi-jinks ensue, expensive special effects will fill the screen and the audience will leave unfulfilled.