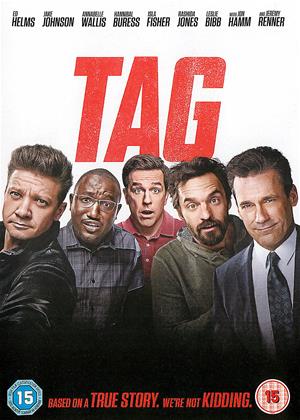 ACTUAL RATING SHOULD BE 2.5 - Tag review by KW

Watchable film about a group of 40+ year olds who have been playing a game every May for years and hope to win this year by catching a colleague who has never been tagged. The story line goes through the motions of how they may achieve it. Will not spoil the plot but some realistic pruning of say 10-15 minutes might have made it!

Been done so many times, or similar, but is quite fun, and nice to see all the guys at the end of film.

Sorry but this was tedious and unfunny. To begin with the idea of five men playing a prolonged game of TAG / It / Tick seemed appealing and lightwork but the comedy cast make heavy work of it. I'm sorry, but this was boring and lazy. Other reviewers have detailed the plot mores for you to better effect than I can muster. Jeremy Renner is always good, but this probably felt like a paid holiday for him as there's very little work going on. I found a lot of bad taste humour pretty basic and uninventive. FAIL.

Tag is a stoner comedy that narrowly avoids most of the pitfalls of its premise. The story takes inspiration from the real-life activity of adults still playing games of tag as a serious and fun endeavor. Looking deeper, there is actually a sports league of the game, where active adults bob and weave through metal mazes to see who can tag the fastest and stay un-tagged the longest. The very sport would seem like an interesting subject matter for a goofy sports picture.

But, no, Tag can spot the problem with that movie. We already have the goofy sports movie of Dodgeball and staging such a comedy would present an eye of an unoriginal comedy. Instead, the film favors a more personal tale of a group of friends who have stuck together through their bond of the game as they went into adulthood. It sounds silly and it's staged silly, but, as the end credits segments reveal, it’s a real thing among long-time friends.

This ensemble comedy takes that very game to the next absurd level. Ed Helms plays Hogie, a veterinarian who is so committed to the game he quits his job and takes on the job of a janitor just to penetrate the complex of his more successful friend Bob (Jon Hamm) to tag him. Other players in their group include the paranoid Chilli (Jake Johnson) and the quietly thoughtful Kevin (Hannibal Buress). But the most prolific of their group is the spry Jerry (Jeremy Renner), a master of the game. Bringing over some of those Avengers skills, Renner’s character takes the game extremely seriously it’s a wonder his real job isn’t that of a secret agent. Any and all attempts to tag this man have ended up in failure, even when it seems he is completely cornered. This will not stand with his friends and they believe that Jerry’s wedding is the opportune moment to finally tag him.

Childish? Sure but the creed among the group, misquoted for more funny, is that we only grow old when we stop playing. Are they childish and take this game too far? Yes, but at the same time, it’s a game that brings them together. Think about it; how often as an adult do you do anything with your friends that aren’t just drinks and dinner? Though over-the-top, these guys bond and emote over a game that always keeps them close even as they drift apart. As bizarre as it would seem that Hogie would intentionally take a lower-level job just to get closer to his friend to tag him, there’s something very admirable about it as well.

Tag still tiptoes down the typical stoner path and does, unfortunately, stage expected gags of the game, but they’re still well enough executed. The game would eventually lead to the woods where Jerry hunts his friends. Absurd, but I can’t deny how brilliant this sequence is staged with the lighting and the atmosphere. The wedding comes complete with a few weird twists too many in keeping the game going, but the fact that everyone seems in on the competition makes the absurdity a little easier to digest in its earnest silliness.

The film has just enough quirk to be a charming enough farce with its funny actors and exciting staging. Few stoner dude-bro comedies ever shoot that high and rarely reach such heights. It’s just a simple bit of ridiculousness where a spy-like Helms attempts to best the Bourne tactics of Jeremy Renner. Their bout in the mall, Helms dressed as an old woman and Renner dressed in tight clothing built for running and gunning, is worth a watch alone.