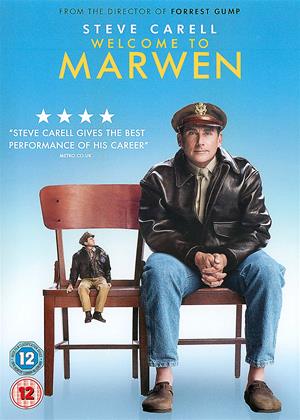 Reviews (2) of Welcome to Marwen

I had no idea what to expect with this movie, but as it started and CGI dawned, I was gripped. It's just SO original, and for once, CGI is used well and with flair - unlike the usual CGI overload of many Hollywood movies.

What is even more remarkable is that it's based on a true story.

It's hard to describe this film - and I usually don't like fantasies though this movie takes place in 2 worlds, in effect.

But just great. Sure., it gets a little twee towards the end as most US movies do BUT even that is not overdone and does not ruin the movie.

I would have loved to have seen a bit more of the funny Russian carer...but these are minor quibbles.

This is the best Hollywood movie I have seen for ages. I won't be watching Aladdin or any Marvel Comic/Avengers mainstream tripe.

If you like your films a little off-beat and quirky, then this is for you.

I shall probably watch it again in 6 months or so - it's that sort of film. Memorable. Original. Classic, even.

Having lost all his memory after a vicious attack, Mark (Steve Carell) spends his days staging and photographing Second World War scenarios with dolls and action figures. It’s based on a true story and the real Mark still exhibits in galleries. He is the hero of the scenarios and the fantasy village he lives in (Marwen) is populated by dolls representing the real women who look out for him.

Expanding on the photographs, the film brings the action figures to life with animated action scenes based on motion capture of the real-life actors acting out the scene. Renowned director Robert Zemeckis is brilliant at this kind of thing. To ensure that the expressions of the dolls and action figures are more realistic than ever, he has even pioneered a step forward in motion capture. The eyes and mouths of the real-life actors are retained on the animated dolls. Watch the DVD extras and be impressed.

Given this, it a tad disappointing that the two-hour film ambles along without any highpoints, but it remains a gentle, easy-going, well-meaning piece that’s worth catching.

There’s something very off in having Robert Zemeckis direct the story of Mark Hogancamp. He was a tragic figure that was beaten up at a bar in 2000 for being a crossdresser, losing his memory after spending days in a coma. His brain damaged and memory foggy, he decided to assemble a town of dolls and action figures he dubbed Marwencol to act as his own fantasy and memory. His photography of Marwencol was intriguing enough to make him recognized enough for an art exhibit and documented in the stellar documentary Marwencol (2010).

But under Zemeckis’ direction, the film spends most of the time retreating into Hogancamp’s fantasy world with a vibrant gloss. When Hogancamp (Steve Carell) isn’t trying to avoid the trial for his attackers or awkwardly coming onto his new next-door neighbor, we witness his surreal vision of a WWII adventure depicted in a Toy Story style of lifelike toys come to life. Hogancamp is no longer a meek man in reality but a strong hero within his own world. He attends to a small village of his own within Belgium, warding of Nazi forces and trying to prevent an evil witch from snatching away any woman he gets close to. And yet Michael seems to have become quite well at amassing ladies around him.

Similar to how Zemeckis has directed his previous films, he zips straight to the fantastic as much as possible that the crimes against Hogancamp are almost an afterthought to the decadent gloss of motion-captured animation to make Carell and company look like moving dolls. These scenes are not without their charms, going the extra mile to surreal, giddy, and violent. I particularly dug how any time a doll is killed they revert into a catatonic state of inanimate plastic and fall like toys would. The action is big, exciting, and even explosive in a lot of these sequences.

But the film pulls back to these fantastical moments are too much that the bigger picture of Michael’s issues seems glazed over to the point of painting a less than flattering picture. For the characters of Marwencol, he bases them on the people in his life and they’re mostly women. He sets up a scenario where women can’t get too close to him but they do anyway. His fantasies are staged in a way that he hopes he can no longer be lonely, at one point coming onto his neighbor with a proposal amid tea. There’s a certain disturbing level to Michael’s stories that never seem to come too far into questioning, where even his obsession with a porn star for his plotting is merely shrugged away. These are the most supportive collective of women ever considering a hobby shop employee makes some of the most desperate pleas for a date I’ve seen in any picture of recent memory.

Having seen both Marwencol and Welcome to Marwen, Zemeckis’ film finds more frills to place on Michael’s story than anything more to explore. I’m honestly surprised he didn’t just choose a straighter story of staging a WWII Toy Story adventure centered around Michael’s photos. Because with the allegory placed on top of such computer-generated adventure, the films seem to speak louder with its doll action than it ever does with its targeting social decay where crossdressers are targeted. This film is equal parts sincere and simplified that it comes off as little more than a saccharine tale of a heartfelt artist.