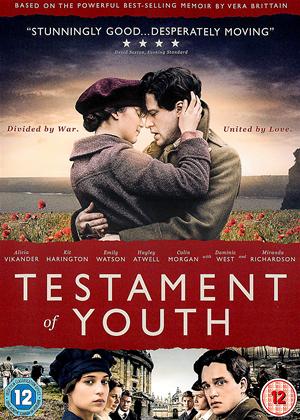 Reviews (3) of Testament of Youth

Based on the first volume of Vera Britain's autobiography published in 1933, the film tells the story of how a gifted girl from a well-to-do family lost her fiancé, her brother and his close friend to the First World War. It shows her experiences as a VAD nurse and how the loss of so many young men turned her into a campaigning pacifist.

Writing this with the book in front of me I like how the film follows the book quite closely - and that perhaps is its shortcoming. The book is an autobiography rather than a history and the attempt at turning it into a drama is well meant but, in my opinion, unsuccessful.

Although the slaughter of so many was dreadful, it is a myth that England lost a generation of the best and brightest. Vera Britain experienced that because it was the young public schoolboys that she knew who volunteered early and left their school OTC for the front - clearly that affected her deeply, but I found the film - while it has its moments - strangely uninvolving.

I was rather looking forward to seeing something of Buxton, my home town, and where Vera lived from 1904 (when she was 11) to 1915 (when she left to become a nurse), although for much of this time she was away at boarding school. I know the addresses where her parents lived - 'Melrose', 151 Park Road, has a blue plaque on the gatepost - but it's a large semi set among many other similar houses rather than the isolated detached house pictured in the film. Buxton has many splendid buildings - but none are shown, and the country walks depicted are unlike any that I know nearby. Vera started her nursing at the Devonshire Hospital, one of the town's most striking buildings, but again this is not shown. Ah well...

The film is beautifully photographed and well acted - in particular Vera's parents are well portrayed by Emily Watson and Dominic Cooper (forever trying to escape the typecasting of 'The Wire'), but confess that I found Swedish actress Alicia Vikander a somewhat unusual choice as Vera, although she was fine (as she was as Caroline Matilda in the Oscar-nominated 'A Royal Affair').

I like Vera Brittain's writing. I like her political leanings. I admire her daughter, Shirley Williams, for her political determination (even if she was jointly responsible for the disastrous SDP), and I quite like this film. The two most moving moments for me were Mr Brittain's reaction on learning of the death of his son, and the view of the Étaples hospital as the camera moves upwards to show the rows of dead and dying.

But 'quite like' isn't very strong, is it? I found the film uninvolving and I felt detached, as if I were an observer, a bystander, as if the film were trying too hard to be 'worthy'. It's not bad, it's worth seeing, but could have been better. I'll give it 3/5 stars.

I enjoyed reading the book many years ago, so thought I would like the film too. Unfortunately, I found the film so dull I gave up watching it. The cast seemed too old for the parts they were portraying, the main characters are all around 18, but in the film they looked as if they were in their late 20's. It was beautifully filmed, but that wasn't enough for me to carry on watching it.

It must be difficult to take such a gripping and moving book as Testament of Youth and turn it into a mediocre film, but this is what has happened. Obviously some episodes and characters have to be omitted, but why include Winifred Holtby at all if you are just going to show her for 5 minutes and not explain her influence on Vera Brittain after the war. Kit Harington is badly miscast as Roland Leighton - Colin Morgan who is excellent as Victor would have made a much better job of it but presumably doesn't have the drawing power of a Game of Thrones star. I recommend that you seek out the BBC TV version of the late 1970s - much closer to the book and a better all round effort.