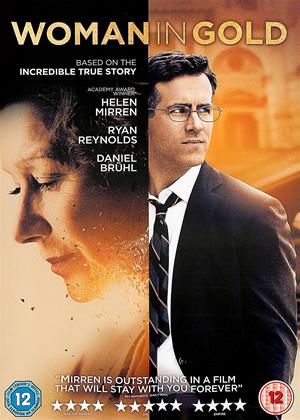 Reviews (3) of Woman in Gold

Very much worth a look. This film portrays a heart warming yet very poiniant story of one womans struggle. Its entertaining and flows extremely well. Would happily recommend for any nights viewing - brilliant.

This is a powerful telling of the real life story of a wealthy Viennese Jewish lady forced to flee the Nazis.

Several decades later with the death of her sister, she finds some papers which sets her on the path of reclaiming the priceless Klint art works that once belonged to her family. In doing so she engages the grandson of another famous Vienese refugee and engages another generation in the 'David and Goliath' fight for justice that somehow history has rendered irrelevant.

I found this a very powerful watch and poignantly beautiful in the scene switches of present day Vienna triggering memories of her young life and her gripping escape from Nazis.

Brilliant! Beautifully portrayed, with the horrors of the Nazi regime highlighted and the traumatic events that occurred in the second World War

Helen Mirren is amazing and her young lawyer was perfectly cast. A real "must see" film

How hard can it be to rebuild from the past? Woman in Gold attempts to answer this question in its non-linear mixture of equal parts war-time drama and courtroom battle. Of course, no life that was tarnished by the Nazis can ever fully be rebuilt after their blatant theft and destruction of Jewish property. But the returning of a painting to its rightful owner is more of an act of apology than that of monetary value.

Maria Altmann was a real-life person affected by World War 2. During the 1940s, she was a Jewish girl (Tatiana Maslany) calling in love while she lived in her family’s lavish estate in Vienna. One Nazi savaging of her home later, she’s an aged woman (Helen Mirren) living in Los Angeles at the turn of the century. She managed to escape with her husband but not her parents. She is now a widow and just recently buried her sister. Upon discovering her sister’s attempts to reclaim their family-owned paintings which are hanging in Austria, she decides to take up the case with her no-nonsense approach to getting what she wants.

For making her case of art restitution, she enlists the lawyer E. Randol Schoenberg (Ryan Reynolds). Though Schoenberg initially passes, he takes note of how much these paintings are truly worth and decides it would be worth the time of the firm he works for to pursue this case. It’s not an easy job, both legally and personally. For one, the art restitution is a bit of an international matter which forces both Schoenberg and Altmann to deal with Austrians that refuse to budge. For two, Schoenberg is expecting a baby soon with his wife and the case becomes so engrossing to his life that he misses the birth of his child. How does his wife take it? She’s supportive enough to pick him out a suit for his next legal meeting just after her water broke.

The film keeps itself a bit flowing with its non-linear style of transitioning to flashbacks of the more thrilling sequences of Altmann watching Vienna crumble under Nazi rule. It helps to break up the long and draining courtroom battles, though there is still plenty of mildly charming personality mixed in between court dates. Mirren and Reynolds have a bit of chemistry in how the shrill woman coordinates with this pensive lawyer. The manner of dicing up the past and present help create a certain appreciation of the scale, where the scene of a young Altmann being presented a gorgeous piece of jewelry carries some weight when we come back to it later as another treasure snatched away from her. A familiar scene, sure, but the presentation makes it sting a bit more.

Woman in Gold, I assume, has some historical inaccuracies given the flow of the film, with such inclusions as an ah-ha moment by Schoenberg is played up as a dramatic turn in the case. For how enamored the film becomes with reaping drama from a court case, you know it has to be embellishing a bit. That being said, for presenting a bit of historical drama mixed some solid performances by Mirren and Reynolds, I was intrigued enough by this tale to keep watching and later look up the rest of the facts. Think of it as a mixture of two subpar films turned into a decent drama.