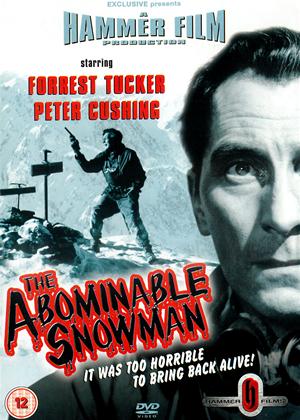 Synopsis:
Gun-runner Tom Friend (Forrest Tucker) embarks on an expedition in search of the fabled creature known as the Yeti, or Abominable Snowman. He is joined by botanist John Rollason (Peter Cushing), whose scientific curiosity is at odds with Rollason’s aim to capture and commercially exploit one of the creatures. Misfortune dogs the expedition as it travels deeper into the Himalayas, but trapper Ed Shelley (Robert Brown) succeeds in killing one of the giant animals. As the party’s numbers rapidly dwindle the ruthless Friend decides to use Shelley as bait in an effort to trap a live Yeti.
The hunters soon become the hunted as a series of disturbing events lead Rollason to suspect that they are dealing with creatures of awesome intelligence.
Actors:
Forrest Tucker, Peter Cushing, Maureen Connell, Richard Wattis, Robert Brown, Michael Brill, Wolfe Morris, Arnold Marlé, Anthony Chinn, Fred Johnson, John Rae
Directors:
Val Guest
Writers:
Nigel Kneale
Studio:
Hammer Films
Genres:
British Films, Classics, Horror
Countries:
UK

Reviews (1) of The Abominable Snowman

Hammer films made a massive impact with their horror output, beginning with 1957’s ‘The Curse of Frankenstein’, which made Peter Cushing and Christopher Lee into household names. It is quite astonishing to me that ‘The Abominable Snowman’ was released only a few months earlier that same year, but it could have been ten years before. This is no form of criticism – it just shows how bloody and revolutionary the style of the Mary Shelley adaption was in comparison.

It can’t be easy to make a film about a group of abrasive characters travelling across unforgiving wastes in search of the deadly Yeti so cosy, yet this is what Director Val Guest manages to do. The Buddhist monks are compliant and cheerful, the British characters are clipped, polite and stoical and the Americans are gruff and loud. All very well played, Forrest Tucker manages to make the irreverent Tom Friend dependable and appealing. Second-billed Peter Cushing and Richard Wattis (as authoritative Dr. Rollason and Peter ‘Foxy’ Fox respectively) are fussily excellent, and Maureen Connell makes the most of her role as Rollason’s wilful wife Helen, the only female in the picture. Wolfe Morris, who plays Kusang, also played another effective and rather chilling monk in the 1967 Doctor Who story ‘The Abominable Snowman.’

I used the term cosy earlier: again, this is no criticism. The camaraderie of the characters, despite their differences, adds much to this, as is the ‘old fashioned’ respect and politeness on display (when the characters are not squabbling, of course). Certainly a modestly budgeted British studio’s interpretation of the savage landscape is beyond criticism. Establishing footage of the terrain meshes very well with the very detailed, expansive studio sets.

This is, however, a very talky film. Despite the fine performances, it would be nice to have seen a little more of the titular Bigfoot. We are teased throughout – 16 inch footprints, eerie sounds, and then a clawed hand. There is a genuinely growing sense of tension as the vengeful creatures (there’s more than one) echo across the snow-scape – and the climactic revelation is powerful and poignant. My score is 7 out of 10.