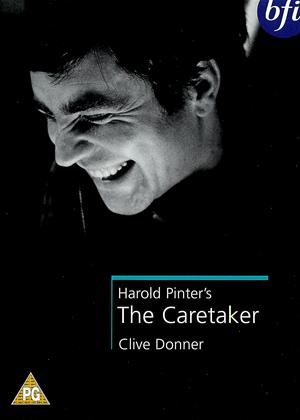 Reviews (1) of The Caretaker

I'm not sure if "spellbinding" is an appropriate word to use about a play which takes place almost as far from Wonderland or Hogwarts as it's possible to go, namely in the junk-filled attic of a semi-derelict house in Chiswick, and one-third of whose tiny cast is a tramp with a foul personality and even worse failings in the personal hygiene department! Though of course it does have dialogue by Harold Pinter, so practically every line is wickedly barbed, often at both ends.

Donald Pleasance is horribly convincing as Davies, the pathetic but utterly unlikeable homeless man given a roof over his head by Robert Shaw's kindly yet slightly disturbing Aston. Although third-billed out of the three people in this film who get any lines at all, Shaw, who ended up being typecast as early seventies hard men and will forever be remembered as the absurdly macho shark-hunter in "Jaws", is absolutely perfect, stealing the show as a gentle, quiet man who you know from the start isn't quite right. And when, in by far the most moving scene, he reveals why that is, even Davies gets the message and goes quiet for a bit.

The very loose plot concerns one of those situations we've all encountered, and perhaps even been in, where two people are stuck in a relationship gone horribly wrong, and a third person who somehow got dragged in ends up taking all the punches the other two can't quite bring themselves to land on each other. Each of the trio copes by having a symbolic objective which will allegedly solve everything, but which we know none of them will ever attain because they're fooling themselves, and maybe not even accomplishing that much. In the meantime, the ghastly Davies, who is both pitiful and impossible to pity, tries to ingratiate himself with whichever brother seems most likely to persuade the other not to throw him back onto the street because it's snowing out there. I don't need to tell you how well he succeeds.

This movie's strong points are the superb acting and Harold Pinter's razor-sharp screenplay, with the bonus of a young Nicholas Roeg behind the camera. Robert Shaw is particularly impressive, especially if you've only seen him playing tough guys in films like "Jaws" or "The Taking Of Pelham 123". On the downside, Donald Pleasance gives such a good performance that his character is genuinely unpleasant to be around, even though thankfully we can't smell him. And as the most intelligent and complex of the protagonists, Alan Bates' Mick only gets to show us what he's really like in subtle moments, which to be fair he handles very well. The rest of the time, the brittle façade of cruel wit he hides behind, and his relentless bullying of the bewildered Davies just because he's finally got somebody to take his frustration out on in such a way that some of it will get through to his brother, make him seem both very unpleasant and weirdly artificial, to a degree which is occasionally Pythonesque. There were moments when I almost expected him to ask Davies if his wife was a "goer".

So technically it's a five-star film, but two-thirds of the cast, who between them get about 90% of the dialogue, are so convincingly nasty that it's not exactly fun to watch, though fortunately Robert Shaw succeeds in making us care about somebody who in the hands of a lesser actor could have been just a slow-witted nonentity. For my money, Pinter's follow-up "The Servant", which is practically "Caretaker 2.0", and which was adapted for the screen the same year as this, is both a better play and works better as a movie. See also "The Birthday Party", directed by William Friedkin, starring Robert Shaw (again) and Harold Pinter, if you can find it, because unfortunately it doesn't seem to be available for rental from this company.