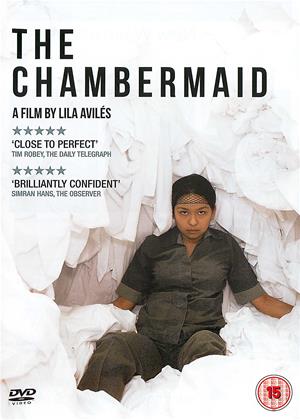 Synopsis:
Eve (Gabriela Cartol) is a conscientious hotel chambermaid. Punctual and enterprising, paying close attention to the details, she hopes her impeccable professionalism will bring her promotion to the Hotel Presidente's exclusive penthouse floor. Long, laborious shifts prevent Eve from caring for her child while she helps guests with their own children. Aviles records her day-to-day activities, from the detail of ensuring rooms are immaculately presented each morning to enrolling in the hotel's adult education programme, which will help her chances of promotion.
When things don't result as planned, Eve transforms her lonely explorations and newfound courage into the necessary strength to face a life outside the glimmering tower.
Actors:
Gabriela Cartol, Agustina Quinci, Teresa Sánchez
Directors:
Lila Avilés
Producers:
Lila Avilés, Tatiana Graullera
Writers:
Lila Avilés, Juan Carlos Marquéz
Aka:
La Camarista
Studio:
New Wave
Genres:
Drama
Countries:
Mexico

Reviews (6) of The Chambermaid

Superb, empathetic study of an invisible workforce - The Chambermaid review by PD

This highly original film, director Lila Avilés' first, is a real gem. It invites us to share the life of this invisible woman, during which time we become ever more painfully aware of the world she tends but to which she has no access. Minutely attuned as Avilés and co-writer Juan Carlos Marquéz are to aspects of gender, race and class, their understated yet highly observational screenplay focuses on this young woman’s daily struggle and her desperate (and ultra-modest) hopes and dreams rather than the lives of her employers. From the opening scene, in which Eve uncovers a surprise while restoring order to a room that looks like it was ransacked by a herd of bulls, Avilés depicts with great skill the everyday unpleasantness that is her job, as well as the frequently condescending and often downright inhuman way the customers treat the 'help'. Some seem more considerate than others, but Eve is invariably forgotten in an instant.

Cleverly, the film takes place largely behind the scenes, following Eve and her co-workers up the service lift, into storage closets and amid the mountains of laundry in what appears to be the basement. Crucially, however, Avilés gives Eve a great sense of dignity throughout, ultimately giving her a heroic quality (as opposed to her complacent and spoilt class 'superiors'). The film is pitch-perfect at revealing the unspoken contract between the hotel guests and the anonymous maids who perform all manner of services for them ( for of course, these women are expected to clean up but never to cross the line), but more importantly, it also explores the dynamic between the staff, as in Eve’s budding friendship with co-worker Minitoy (Teresa Sánchez), one of the few people who actually seems to 'see' Eve.

The self-taught director apparently met and researched the maids working at the Intercontinental Hotel during pre-production and rehearsal phases, and this certainly shows. Indeed, Gabriela Cartol 's performance proves so unmannered, so utterly believable throughout, one could be forgiven for assuming that Avilés had found her working at the hotel. The film may feel overly minimalist to those accustomed to a more conventional narrative / action, but there’s an intricacy to all the seemingly mundane details Avilés opts to include, and a photographic instinct behind the way she composes each scene. Sitcoms and studio films have established a comfortable assortment of angles for covering spaces such as hotel rooms and hallways and whatnot, but Avilés render these areas as alien, sci-fi like spaces, particularly when we see them from Eve’s perspective, as in low angles that seem to decapitate other characters as for example when she retrieves lost objects from under the bed. Equally as importantly, Avilés never overplays her hand whilst making it crystal clear that Eve’s aspirations are tragically defined and diminished by the kind of moneyed guests she waits upon, and the final moment of the film, beautifully simple as it is, has a subtle power worthy of the great directors. As a result of this deeply empathetic piece, we are likely never to look at this invisible workforce in quite the same way again. Superb stuff.

The review by PD expresses the key elements of this engaging but ultimately sad film.

The sterile environment of the hotel is the dominant force at every stage. Eva's core of humanity is expressed only in occasional moments: the electric shock administered by Minitoy; the daring scene where she strips for a transfixed maintenance worker; and the outburst of rage when she is told that she has not got the job she has worked so hard for.

The most telling moment is when she realises that the mother and baby she has been helping have left the hotel without telling her. She furtively pockets a bib that she finds under the bed, a tragic symbol of her enforced disconnection from her own child.

This is apparently the director's first full length feature film. Can't wait for her future work!

The hidden ones - The Chambermaid review by DF

One expects that most of us will take ‘hotels’ for granted; we enter, we sleep and we leave. If we are not happy about what we paid for - we post reviews. After viewing this movie you might reflect a little bit when you next book into a hotel. The movie portrays the daily routine of the workers behind the scenes in a huge modern hotel and in particular a chambermaid named Eve who is a self effacing modest young woman trying to do the best for herself and her child. She works hard in the hope that she will attain her ‘dream’ to be promoted to work on the 42nd floor, the ultimate prize for a chambermaid. Eve, played so well by Gabriela Cartol, is exploited, because of her almost naive good nature, by guests and also by her more worldly wise co-workers. She babysits for a boorish posh guest with, ultimately, no thanks. Other guests hardly recognise her presence and  her co-workers see her as a mark for jokes or for their sideline efforts in ‘marketing’. The director Lila Avilés relentlessly shows the cold machinelike workings of the hotel but never letting Eve absent from the camera lens as she is remotely ordered about by her 'boss' using a walkie-talkie. Yet in spite of everything, Eve has hopes; promotion, acquiring a red dress and she even indulges in  a 'distanced' relationship with a window cleaner which is really full of pathos. Will her hopes come true and will she be rewarded for her tireless work? Will Eve find Eve? Avilés works the story very cleverly to a denouement in the very last seconds of the movie.  An excellent movie showing the grind of  ‘hospitality’ workers; an exploited alienated underclass unrecognised and hidden.

Poignant and eventless - The Chambermaid review by CSF

A brilliant study of a character but not like the French film "The Chambermaid" with Jeanne Moreau. A little too much like a document of one day in the life of..... I find it frustrating because I kept asking myself questions all along and then they are never answered or it may be too subtle for me. More eventful would attract more viewers.

Masterfully crafted - The Chambermaid review by BE

As a Spanish teacher, I like to be absorbed in Hispanic life in a film, and this certainly did that. I also learned a few new Mexican expressions. The acting was good, and a very good point was made about the hard working conditions of Mexican hotel workers. It was very slow, which can be a good thing as you certainly were drawn into her world, but not a film to watch if you want to be cheered up. However I am aware that we watch many films to experience another's reality, happy or sad, and you certainly feel at the end that you have lived and understood her life for a few hours.