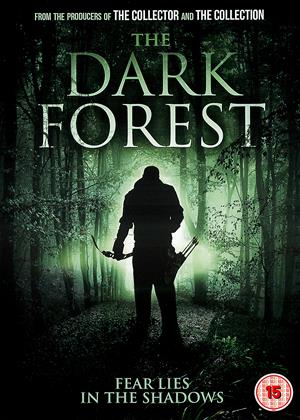 Synopsis:
In an attempt to land their own hunting TV show, Jake (Josh Stewart) and Stevie (Ronnie Gene Blevins) head to the dense, secluded mountains of West Virginia. Equipped with only their bow and cameras, they have three days to kill a monster Buck big enough to grab the attention of a TV network. Once they find the massive animal, they look to strike fast. But as the sun sets, they realise they're not alone. A supernatural force appears to be lurking in the vacant woods... and now they're the ones being hunted.
Actors:
Josh Stewart, Skipp Sudduth, Katherine Von Till, Ronnie Gene Blevins, Nikki Deloach, Brett Forbes, Jessi Blue Gormezano, Patrick Rizzotti, Jim Stallings
Directors:
Josh Stewart
Producers:
Brett Forbes, Patrick Rizzotti, Josh Stewart
Writers:
Josh Stewart
Aka:
The Hunted
Studio:
101 Films
Genres:
Horror, Thrillers

Reviews (1) of The Dark Forest

As found footage films go, this begins with one of the most persuasive scene settings I’ve seen for some time. Whilst testing his camera equipment, Jake (Josh Stewart, who also wrote and directed) is enjoying a laugh with his tiny children, who in turn are screaming with delight at the images on the camera. They don’t know they’re part of a horror film, they’re just having fun; as an audience member, I’m instantly thinking that surely such an appealing family unit isn’t going to be wrecked by anything ‘orrible.

With little further build-up, Jake and Stevie (Ronnie Gene Blevins), are deep in the forests of West Virginia. They meet the quietly threatening Tony (Skipp Sudduth) who lives in the forest, and his daughter Jessie (Jessi Blue Gormezano). As the two friends hunting monsters, not a huge amount happens. This is a slow burner, despite wasting no time in setting up the premise. But if you’re happy with that – and I am – this is worth your time.

The acting is very naturalistic. You really believe these two are good friends. So when their footage appears to be tampered with, and the Blair-Witchy-woodlands behave strangely, it is effective. Most potent, however, is the child-like screaming of whatever is ‘out there’.

Whilst the ending is disappointing, I enjoyed this for the most part. It is strange to once more glance at reviews and see the marks given for ‘Dark Forest’ 10 out of 10 and plenty of praise, or 1 out of 10 for the obligatory ‘worst film I have ever seen’ nonsense. The truth as I see it, is about halfway between the two.